Top 10 Sox Moments in The Bronx

As the whole world knows by now, this three-game series the Red Sox are playing against the Yankees in the Bronx starting tonight will mark the final time they will play in the second Yankee Stadium. That is, unless they meet in a one-game playoff or the ALCS, both of which seem rather unlikely. (And always remember, the original stadium, the one that Ruth, Gehrig, DiMaggio and Mantle played in, is long gone, having had a date with the wrecker's ball in 1973.)

Of course, every writer has to put their "top 10 moments" list together, especially when it concerns the Red Sox. I'm no different, so here's my Top 10: 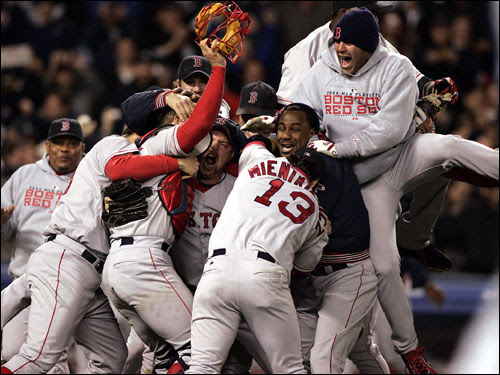 UPDATE: I just posted a column over at Bornintoit.com called "My Favorite Sox Games at The Bronx." It is my five favorite Red Sox games I either witnessed live or on TV there. Please do check it out.
Posted by The Omnipotent Q at 10:46 AM

Absolutely. No need to mention any other moments. They ALL pale in comparison.

You got that right Suldog...and I'm glad we're on the same page, Jere...

And last night, we're all glad that Timmy is back and the 'pen has been so effective lately. The Sox are playing great ball at the PERFECT time, and Josh will be back on Friday. In the Great One's words..."how sweet it is!" P.S. The great one was Jackie Gleason, as you probably know.
Hey, take care John and Sul and Jere, good friends all.

And Peter n - in the "small world" dept.

The talk last night at another blog I frequent a lot had a lot of Honeymooners and Gleason talk in it. I even learned something. I remember watching the "originals" of that show with my parents when I was a young kid. It was one of their favorite must-see programs. Turns out we were watching re-runs even then, in the early 60's! The last shows were actually taped in '57 or so, just as I was being born.
Who knew?
Well, I'm sure my folks did, but I sure didn't. Yet another example of the weakness of our memories of "how things were".

Peter, it was GREAT to see the Sox playing well without Lowell and Drew, and on the road. And of course, beating the Yankees makes me REALLY happy!

SoSock, here in NYC, Channel 11 shows two episodes of "The Honeymooners" every Sunday night/Monday morning at 1 AM. The shows are selected by the fans and I'm really into it. I wasn't a huge fan in the past but I am now.

God bless Mr. Gleason, wherever he is.