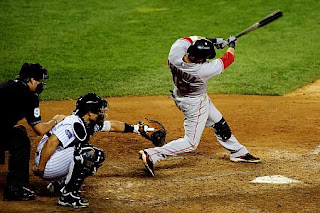 A close contest turned into a rout last night at Yankee Stadium as the Red Sox took New York apart, 11-3, and drove another stake into any possibility of the Yankees playing baseball this October.

Dustin Pedroia's grand slam (pictured, with thanks to Joy of Sox for the pic) capped a seven-run eighth off the awful Yankees bullpen. It was Dusty's first career slam and his 15th blast of the season. Jason Bay drove in four runs, to give him six for the two-game series, and David Ortiz was on base four times.

It's turning into a Bronx Massacre as the Sox have outscored New York 18-6 in the first two games. You know things are really bad for the Yankees when they put their season in the hands of one Sidney Ponson. And he responded how you'd think, by giving up four runs in just less than five innings. Paul Byrd, who had gotten banged around by New York in two starts this season while with the Indians, did exactly what Tim Wakefield did last night. Gave the Sox some quality innings, and turned it over to the pen to finish. He went six, gave up just two runs.

And last night there was a rare appearance by Hank (Horse's Ass) Steinbrenner, appearing at Yankee Stadium for just the second time this season. And he fumed after the game about his $200 million payroll underachievers: "They sucked." Notice how Hankenstein used "they" and not "we", as he usually does about his team?

It's been a fabulous road trip for the Red Sox. They are now 6-2 in this nine-game swing through the AL East. The Sox had not played well away from Fenway all year, and were under .500 against the East before the trip began. And what makes it all the more remarkable is they have done it without Mike Lowell, J.D. Drew, Sean Casey and Josh Beckett.

Only the most cockeyed of Yankee optimists believe the Yankees have any shot at the postseason now. They trail the Sox by 7 in the Wild Card and the Rays by 10 1/2 for the division. My pal Eric may have put it best when he said to me after Pedroia's grand slam about the Yankees: "Time to get the golf clubs ready." The Red Sox now still lead the WC by 2 1/2 as Minnesota won, and Tampa Bay win kept the Sox 3 1/2 back.

The Red Sox go for the sweep today, with Jon Lester on the hill in the final game they play in the second Yankee Stadium.
Posted by The Omnipotent Q at 9:57 AM