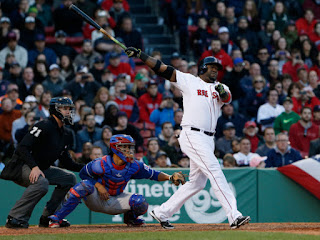 And it's about time.
Posted by The Omnipotent Q at 4:54 PM No comments:

Add another one to the litany of Minnesota Vikings tragedies.

So what does the Good Lord have against the Vikings? (At least no know-it-all, wiseass sportswriter has made up some kind of "curse" they are under. At least, not yet anyway.)

Blair Walsh missed a chip shot FG from 27 yards with 26 seconds left that would have given the Vikings their first postseason win since 2009, but it gave the Seattle Seahawks a 10-9 win.

Walsh simply shanked it to the left, and as soon as it left his foot it was going wide. (On NBC, Cris Collinsworth made a big deal that the laces on the ball were "in", but a close look at the video of Walsh's other field goals showed he made his second FG of the day, a 43-yarder that went right down the middle, had the laces "in." So please get off holder Jeff Locke's back, everyone.) It was later pointed out that Walsh planted his left foot too close to the ball, and that probably caused the shank.

Walsh was a standup guy afterwards, as he stood at his locker after the game and took the blame for the miss. He's a terrific kicker, as he led the NFL in field goals made with 34. He got a torrent of abuse on Twitter after the game from so-called "Vikings fans", which he doesn't deserve.

52,000 fans sat in below zero temperatures yesterday and saw another agonizing Vikings postseason loss. This brought back memories of 1998, and Gary Anderson's wide left in the NFC Championship game. He was perfect all season, and missed just one. THAT one. That loss to Atlanta is still the worst loss in franchise history. The Vikings had lost just once that year before the title game, and looked on the cusp to make history. They did, but for the wrong reasons.

Yesterday's loss left me with a similar feeling to when the Red Sox lost the 2003 ALCS to the Yankees on that home run by You Know Who. I went to Facebook and wrote this:

The Vikings had a season that few would have predicted they would have had. They won the NFC North on the final day from Green Bay with a tough, young defense. Adrian Peterson had an incredible bounce back year, winning the rushing title. Teddy Bridgewater continues to improve as a QB. I was hoping this would be a year they could possible sneak in as a Wild Card, but they did better than that. They are a team on the rise, and the future should only get brighter, as they move into a brand new ballpark. The Vikings played valiantly against what was a better team in Seattle, but not putting up any TDs and settling for field goals really hurt them in the end. But Walsh's 4th field goal could have erased all that. It didn't.

I've been a Vikings fan since 1972. I became a fan when Fran Tarkenton returned from the Giants, and loved the Purple People Eaters defense, playing in arctic conditions in December and January. I've been through the worst losses they've gone through. And I thought to myself last night, like I did after the Red Sox lost the 2003 ALCS, "do I still want to root for this team after everything they've put me though?"

The answer in both cases is: yes.

It's been 44 years now, it's too late to turn back now. I'm proud to be a fan of the Vikings, and will stick with them through thick and thin.

Just win the whole f**king thing next year. Please.
Posted by The Omnipotent Q at 11:35 AM No comments: 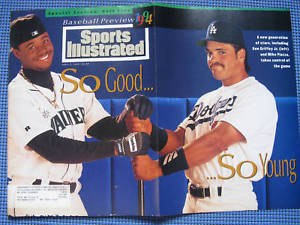 Griffey and Piazza will be inducted at Cooperstown on July 24th.
Posted by The Omnipotent Q at 11:37 AM No comments: 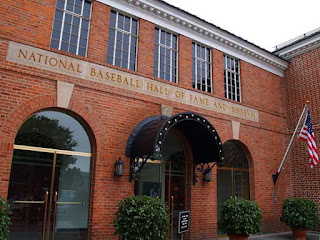 This is Nomar Garciaparra's second appearance on the ballot, and probably his last. He's gotten almost no public support, and it looks unlikely he'll get the 5% to continue next year. He barely survived last year, getting 5.5% of the vote. Like Don Mattingly, his career just flamed out too quickly, and that is a damn shame.
Posted by The Omnipotent Q at 10:27 AM No comments: