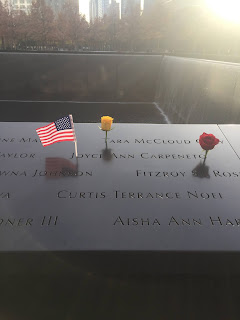 It’s hard to imagine that it has now been 20 years since the terror attacks that devastated our country. The attacks at the World Trade Center, the Pentagon and the crash of Flight 93 in Pennsylvania shook our country to its core, but for me, it was really personal, as my dear friend Joyce Carpeneto was one of the nearly 3000 victims that day. And every September 11th, I remember her on my blog.
Joyce was simply one of the nicest people you ever could meet. I worked with her at Tower Records in Greenwich Village in the 1980s and 1990s, and she was an incredibly talented person, working in the Greenwich Village Art Department until she left for General Telecom in 1998.
Joyce had the terrible misfortune to be on the 83rd floor of the North Tower on September 11, 2001. She and all 12 of her colleagues perished that morning, and nothing was recovered of any them.
Back in 2001, I wrote that a day won't go by that I won't think of her. And that has proven to be true. I wear a beautiful bracelet with her name on it, so she is never far from my heart.
I try to honor my friend every chance I get, but this time of year is the most special. I will be at the 20th anniversary ceremonies at the World Trade Center for the 20th consecutive year, and the following day, I will be at the Tunnel to Towers Reading of the Names of the deceased First Responders at the WTC. I am honored to read the names of 18 heroes who gave their lives for our country, and I will acknowledge Joyce when I conclude.
Wherever Joyce is, I know she would be pleased with the way I remember her, but she would also be a little bit "embarrassed." For her, it would be more important that her family and friends enjoy themselves and have fun as opposed to mourning her loss. When I see photos of her, I always smile, and I think of those good times we had together.
Every year, I put up the links to the previous years posts about Joyce, and this year will be no different. Please say a prayer for all those we lost on September 11, 2001, and also for those brave First Responders who we lost as well, and those who continue to suffer because of that terrible morning. They will always be a part of my prayers.
God bless you, Joyce. I was so blessed to call you my friend.
2006: Forever Missed. And Forever Loved.
2007: Never Forget. Ever.
2008: We Can Be the Ones Who Remember
2009: The Most Sacred Of All Days
2010: 3000
2011: Ten Years After
2012: 11 Years
2013: No Other Place In The World I Could Be Today
2014: Always and Forever Family
2015: I'm The Lucky One
2016: Joyce and Alice
2017: Tower Records Forever
2018: A Great Honor For Me This Year
2019: 18
2020: The Years Just Fly By
Posted by The Omnipotent Q at 5:10 AM No comments: