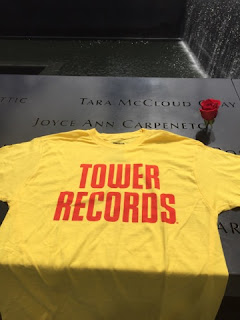 It's that day again.

Today is the 16th anniversary of the worst terrorist attack on the United States, when nearly 3,000 innocent souls were brutally taken away from us in attacks on the World Trade Center, the Pentagon, and in a field in western Pennsylvania. On that day, my dear friend Joyce Carpeneto had the terrible misfortune to be in her office at General Telecom on the 83rd floor of the North Tower. She didn't make it out, and none of her other 12 colleagues with the company made it out either. General Telecom suffered the worst loss of life of any company that was below where the planes struck in either building. Nothing was recovered from any of the lost 13 employees.

I have honored Joyce here every September 11th on my blog. I have been to all of the previous 15 remembrances at the World Trade Center, and will be there again today. As many of you may know, Joyce and I met at Tower Records in Greenwich Village back in August 1985. I had been there just about nine months, working as a rock floor clerk. Joyce joined as one of the "Front Desk Girls", who assisted customers as they entered the store. We became fast friends, and worked together until 1990, when Joyce joined an offshoot company connected to Tower called TRIP, which stood for "Tower Records Import Product", which sold product to all the Tower stores in the region. I joined her as her assistant in 1991, and she was a joy to work with as my boss.

In 1993, the company merged with another called Bayside Distribution. I was kept on, but Joyce was let go, which was incredibly short-sighted on their part. Joyce went back to Tower and worked as an instore artist, creating all kinds of incredible art used in the store, which included things like album covers and such. She was incredibly talented, and worked there for about 5 years, when she left Tower for good to join General Telecom in late 1998.

Last May, I discovered online that Urban Outfitters was selling Tower Records shirts, and I had to get one. I didn't have any of my old ones any more, and jumped at the chance to get one. Their store on Fulton Street had them, so I ordered one online, and went to the store to pick it up.

On my way there, a thought struck me. The store was just a few blocks from the WTC, so I came up with an idea. I got the shirt, and walked over to the memorial. It was the middle of the afternoon on a Thursday, and it was filled with the usual tourists. I reached Joyce's name on the North Tower pool, took out the shirt, and put it just below her name. I pulled out my iPhone and took some photos. There were some tourists watching me do it, and a couple from India asked me what I was doing. I explained about Joyce and Tower, and they even asked me if I would pose with the shirt so they could take a photo of me (I said yes).

As I took the photos I thought that I should save them for this September 11th, so I did.

I know Joyce was smiling as I took those pictures. I see them and they make me miss Tower, and especially Joyce, so much more.

As I said before, I have honored Joyce every year here on this blog, and if you'd like to read my past tributes, please click the links below:

May God bless all the 9/11 victims and their families on this difficult day. Say a prayer for them, and especially those first responders who are ill and dying.

We miss you, Joyce. Thank you for being such a special part of my life in my most favorite job. I'll always love you.
Posted by The Omnipotent Q at 6:00 AM