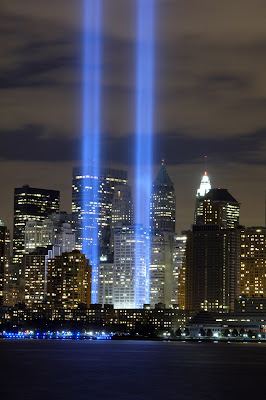 This is the 3,000th post of The Mighty Quinn Media Machine, and I realized back in July that we were approaching an historic number. And of course, I knew it could only be about one subject, and one subject only.

And it could only happen on this day.

For the ninth consecutive year, I will be at Ground Zero this morning for the ceremonies to remember the victims of the terrorist attacks on the World Trade Center of September 11, 2001. I will be there with my friend Deborah, who has been with me at every one as well, and it's been a blessing that she's a part of my life. For us both, it is a sacred day at a sacred place, to remember our dear and lovely friend Joyce Carpeneto, as well as the other beautiful souls who were taken from us that terrible morning.

I can't be any other place in the world on the morning of September 11th but in Lower Manhattan at Zuccotti Park, where the ceremonies have now been held the last four years, after the construction really got going at the actual site. I've always said that if I am 10,000 miles away from New York on September 10th, I will be in Manhattan the next day. It's like a holy day of obligation.

And I will be there every September 11th for the rest of my life.

There's been plenty of controversy at the site this year, but today is not a day for that. Today it should just be a day to remember the victims. Period.

And I will conclude this post with these two quotes:
"Good days, bad days, but never a boring day on this job. You do what God has called you to do. You show up, you put one foot in front of the other, and you do your job, which is a mystery and a surprise. You have no idea, when you get in that rig, what God is calling you to. But He needs you, so keep going. Keep supporting each other. Be kind to each other. Love each other. Work together. You love the job. We all do. What a blessing that is." --Father Mychal Judge, dedicating a firehouse on September 10, 2001, one day before his death

"It's been 233 days since September 11th. I've been to 28 funerals and memorial services and I should have gone to more, but some days I just couldn't face it. 233 days and in a few weeks it's going to be over. Everyone and everything that was going to be found will have been found. Won't be any place to dig. And then we are just going to have to walk away. And there will be a park with a marble monument with names that will slowly stop seeming like real people. Soon enough it will be just us. We will be the ones who remember. That's what we can do to honor the people we loved and lost. We can be the ones who remember." --Bruce Weitz, from the TV series "Third Watch," May 6, 2002

Say a prayer for those lost nine years ago today. And especially for their loved ones who had their lives shattered and are trying to move on without them.

We'll never forget. Ever.
Posted by The Omnipotent Q at 12:01 AM

JQ, I just finished writing my post and I had a few words to say about 9/11 and you. I also linked your blog addy. Thank you SO much.

Quinn, I used to only think of the firefighters on this day as my only specific connection was because I visited one of the fire stations on my Nov 2001 visit. But after hearing your story of your friend...it's helped me to really put a face to the other victims that day. Thanks!

Ive not returned to NYC since then...but next year, I will be there. I've asked my cousin who brought me in 2001 to bring me again. I hope to see you on that day if nothing more than to give you a hug.
I'm not sure where you are located but the fire station I visited and will be returning to is Engine 54, Ladder 4 and Battalion 9. The station had lost the largest number of men in one station and was why I had chose them to go to.
Remembering for you

Thank you from the bottom of my heart for the lovely words, Donna. It was another emotional day at Ground Zero, but I was so proud to be there. I am touched that my words had an effect on you. I live in Brooklyn, and that firehouse is in Midtown Manhattan.

I look forward to seeing you next year. Keep the faith.

Quinn, I'm not sure if I've ever posted here before, but what a well written post. Never forget.

Thank you for the kind words, Ted. May we all have peace in our lives.

Thank you, Rick. I think of 9/11 every day, too. The bracelet on my right wrist is a constant reminder. And it will be there for the rest of my life.