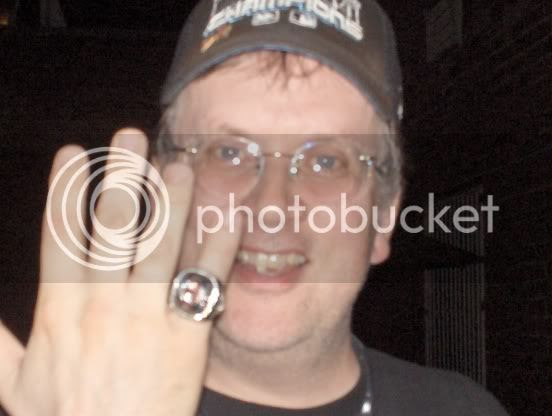 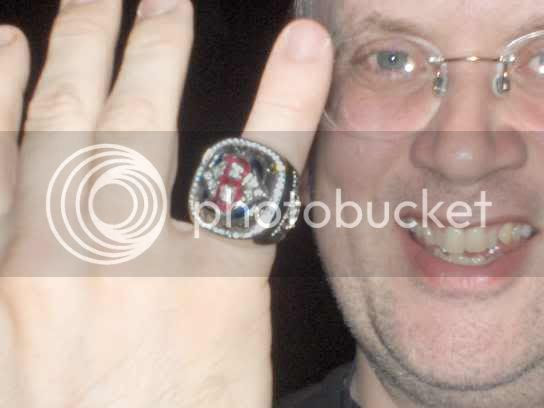 Well, here they are. My friend FiNY took these photos of me back on July 4th with one of the most incredible rings I have ever seen. It is a genuine 2004 Red Sox World Series ring. A friend of mine has a sister who worked for the Sox back then and got a ring. It was amazing to see up close. Many thanks to him for allowing me to model it.

It was so small it could only fit on my pinky, though.

I'd seen World Series rings up close before. I remember when Gil Hodges died in 1972, and my dad took my family to his wake at a church in my neighborhood in Brooklyn. I was just 10 at the time. (Mr. Hodges only lived 11 blocks away from me.) He was wearing a World Series ring as he lay in his casket. I'll never forget how big it was.

I've also had the pleasure of meeting Willie Randolph on two occasions. The first time I met him was in 1997 at the re-opening of the Tower Records store in Lincoln Center. He was wearing his 1977 championship ring, and I asked him if I could see it. He was a very gracious and did so. It was another huge rock, with an enormous Yankee logo in the middle. Willie told me the first ring was always the most special for him, and always wore that one.

Well, now I've finally gotten a chance to wear one, if only for a very brief few moments. And it was one from a very special year, and a very special team.
Posted by The Omnipotent Q at 12:03 PM

hey it's my first visit here
nice blog, i will come back =)
-julie

The look on your face when you saw it was just so fantastic. I am so glad I was there when this happened.

The look on your face is nearly the same as mine when I got to touch the Trophy. Unbelievable, that ring. Absolute rock star, you are, MQ!

nice blog It is my first time here to anyway got the link off of Julies blog.
-kaylee

p.s. YOu can come visitmy blog but i am "link challenged" havent been able(even know julie gave me instructions still cant figure it out) to figure out how to post a link haha so click on my name in blue and see if you can get it yu should be able to.
Hope you dot mind if i come back
-kaylee

Thanks for visiting Kaylee. You're certainly welcome to come back any time, and thanks for the invite, as I will check out your blog too!

I will be back but I havee to try not to get in trouble by my mom cuz all i do all day is write and read blogs.Never do chores so i gt yelled at often.I love baseball can u tell?i love my red sox too.
-kaylee

thanks for visiting my blog!! i will definately put your link up.
and i am so jealous that you got to put on a world series ring!! that's like my dream. you are so lucky =)
-julie

Thanks Julie...it was quite a thrill. I only wish could have had one to keep...

Thanks Matty......I also have a picture of me with the Trophy from November 2004 that I will post on my blog soon. It was also a thrill as well.

I saw that same ring, Omnipotent Q, as I went in & filed past his coffin:

It was also the same time that I actually saw a Seriously-Ill Jackie Robinson, arrive @ the Wake;

"The Boys Of Summer" were beginning to die off.

I also remember at Gil Hodges' funeral,I was standing across the street seeing a black man entering the church with an amazing head of white hair, and I can remember a man near me saying, "That's Jackie Robinson."