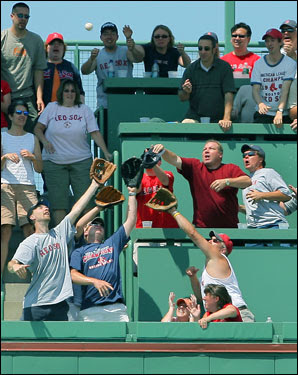 Josh Beckett signed a three-year, $30 million extension yesterday, then went out and pitched his best game of the season as the Red Sox beat the Kansas City Royals again, 1-0. It was the first time since 1916 that the Red Sox won back-to-back 1-0 games at Fenway. Some guy named Ruth pitched one of those victories in 1916 against the Yankees.

Manny Ramirez hit a homer in the Monster seats (see photo) in the fourth inning, and that's all the offense the Red Sox needed. Beckett was tremendous, allowing just four hits in eight innings. Jonathan Papelbon notched his 29th save to give the Red Sox a sweep over Kansas City.

All the news wasn't good yesterday, as it was revealed that Tim Wakefield has a stress fracture in his ribs, and will likely miss at least 3 weeks. So, this puts Theo Epstein in a tough spot, as it appears to me that the Sox will have to go out and get a starter to eat up some innings. Theo has promised that he will not mortgage the future to pick up a pitcher. We'll see what he does.

David Wells is making good progress, and will join the Red Sox on their West Coast swing starting this weekend. He may still be at least two weeks away. The Red Sox will start AAA pitcher Kason Gabbard against Seattle on Saturday in Wakefield's place.
Posted by The Omnipotent Q at 12:25 PM

Great post.we will see what Garbbard turns out to be nice win today.
-kaylee

nice post, and a nice win! my fingers are cemented crossed for wake and his rib, as well as for gabbard. so far our promotions from the minors have impressed me. pauley, lester, hansen... i would love for gabbard to join this list. good vibes :)
-julie

I love your fan club, MQ...hehe...Is Wells getting closer to returning really a good thing? I'm not so sure...I'd rather take my chances with some Triple-A kid...although I'd rather not take them with Jason Johnson, or some other retread...

I love that pic!!