"Once In A Lifetime" 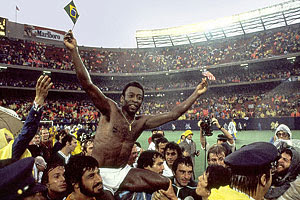 Yesterday, a documentary opened here in New York at the Angelika Theater in Greenwich Village called "Once In A Lifetime: The Extraordinary Story of the New York Cosmos." I saw it, and it is absolutely one of the best sports documentaries I've ever seen.

I became a soccer fan right around the time that Pele was lured to play for the Cosmos from Brazil in 1975. I became a huge Cosmos fan, and stayed one until the NASL folded in 1984. So I was very curious to see this film. It was certainly well worth it.

The documentary brings back the era when soccer exploded on the American scene in the mid-1970s, and there's a great soundtrack of that time. The film begins with soccer's roots in America, going up to the US' shocking World Cup victory over England in 1950 and the start of two professional soccer leagues in America in 1967. Their are interviews with many of those who were part of the start-up, like Clive Toye. Unfortunately, the godfather of American soccer, Steve Ross, who was the Cosmos principal owner and head of Warner Communications, died in 1992. It was his vision that soccer could make it in the US that got the ball rolling.

The early history of the Cosmos is fascinating, as told by their former flashy goalkeeper, Shep Messing. Their beginnings were rough, playing before few fans at Downing Stadium on Randall's Island (I was there once, in 1974, for a football game, and it was a dump). The Cosmos were on the verge of failure when the Cosmos owners approached the immortal Pele, who had just retired from Brazilian soccer as the greatest player in history. The film goes into all the particulars of getting Pele to New York, but suspiciously leaves out the real reason he came here. (He needed the money, as he was going broke due to bad investments.)

The interest in soccer booms with Pele's arrival, but the film shows the man who was soccer's "villain" in New York: sportswriter Dick Young, who had a vendetta against the sport (as well as Tom Seaver, but that's another story), and even interrupted Pele's introductory press conference. The film even shows Pele at Shea Stadium, being warmly greeted by Mets fans during a 1975 game. (And there's even a shot of the 1975 World Series in the film. We all know who played in that one.)

The Cosmos' owners, after Pele's arrival, realized they needed to bring in more stars, so they imported Giorgio Chinaglia from Italy.

This maybe the best part of the film. Chinaglia had always been a lightning rod for controversy, and apparently still is. Interviews with many of the Cosmos' front office from that time doesn't paint a pretty picture of Giorgio, and he still has the big ego that made him famous. But the Cosmos began to take off, and they moved to Yankee Stadium in 1976 and attendance continued to grow. The next season they brought in more stars, led by "The Kaiser," Franz Beckenbauer. The Cosmos then moved into Giants Stadium, and they just took off in popularity, drawing over 76,000 on a few occasions. It was also Pele's last season, and they won the NASL title over Seattle that August. The Cosmos were kings, and the film shows a few of the excesses that went on at that time.

The Cosmos won the title again in 1978, and set even more attendance records. But here is where they peaked. Chinaglia is painted as a control-freak, and had the ear of Steve Ross and began calling the shots. The NASL also expanded to 24 teams from 18, which was a big mistake, as many cities couldn't support a team and many folded soon after. In 1979, the league got a TV deal with ABC, but the ratings were never good and it ended after one year.

The Cosmos won two more titles, but the league was foundering. The Cosmos were the big fish in a shrinking pond, with teams dying every year. Finally by 1984, the NASL went out of business, and soccer in America had no professional league until MLS was formed a dozen years later.

It was great to relive the soccer boom of the late 1970s, as it brought back many fond memories of my youth. It was a shame that it burned out so quickly, as for a time it looked like soccer was going challenge the other major American sports in nationwide popularity. (Howard Cosell is shown predicting that it would.) "Once In A Lifetime" is a fascinating look back at an era of excess and egos. Many of the principals involved were part of the film, like many former Cosmos players like Bobby Smith, Steve Hunt and Dennis Tueart. But there was one notable absence: Pele. At the end of the film, he is shown to have declined to be interviewed, and when the graphic is shown on the screen, the sound of a cash register is heard (so you can guess why he didn't cooperate).

The film has a lot of great humor, and is definitely worth checking out, even if you aren't a soccer fan or don't remember that time. The movie opens nationwide on July 14th, and to learn more, check out the film's web site: http://onceinalifetime-movie.com.

Was Pele a threat to M. Donald Grant, so much that Dick Young had to be so boorish?

I never knew that Chinaglia was such a control freak(Grant-Lucchino Anyone);

That stood as a Giant Stadium Paid Crowd Record, for 22 Years.

The movie mentioned the night the Cosmos thrashed Ft. Lauderdale and set the attendance record; I remember that game well...

The Omnipotent Q said...
This comment has been removed by a blog administrator.
11:12 PM

Something tells me that some in-law of Dick Young, may not have been hired by The Cosmos, similar to what happened in "Seaver Deal I":

Just what was in Young's Head, Anyway?

Only that Young's Son In Law, worked for Mets Broadcast Operations,in 1977 @ the time of "Seaver Trade I."

Eddie Firmani was Coach in a # of those years:

It took this World Cup to think of The NY Cosmos, all these years;