July Was Ending With a Thud. Until...

The Red Sox had a terrible June, and they needed to get their act together in the month of July if they were serious about making a playoff run.

June concluded with a lethargic 4-0 loss at Tampa Bay, and the Sox were 42-36, 5 1/2 games behind the front-running Orioles in the AL East. The Sox went a miserable 10-16 in that month, but as soon as the calendar flipped over to July, it looked like things were coming together.

They got back home to Fenway and won 7 of 9 against the LA Angels, Texas and Tampa Bay, and then they hit the All-Star break. The Sox remained hot, winning 2 of 3 in New York, and won the first three games back home on another nine-game stand. They walloped the lowly Minnesota Twins, 13-2, and found themselves one-half game in first place, on July 21st.

Then all of a sudden, things took another turn. The Sox left a thousand guys on base in a 2-1 loss to Minnesota the next night, and then blew a lead and lost again, 11-9. The next day the Sox barely held on to an 8-7 decision, once again to one of MLB's worst teams.

And then the Detroit Tigers came in and swept the Sox, losing one game on a walk with the bases loaded. The Tigers are fighting for a playoff spot so they are a better quality club. But once again, the Sox were having trouble winning close games. In this series, they lost by two runs (4-2) and one run (9-8 and 4-3). I was hoping for a 6-3 homestand, but losing five of the last six made it 4-5. It also dropped the Sox into third, 2 1/2 games back.

The Sox then hit the road, and would conclude July in Anaheim. I figured they'd need to at least split the series. The Angels are long out of the playoffs, but were having a very good July. David Price opened the trip with eight stellar innings, but the offense could score just one run. Brad Ziegler came on for the save, and had been very good since coming over from Arizona earlier in the month. But the Angels rallied to load the bases with one out. Ziegler got a groundball to first, but Hanley Ramirez through one to the backstop to bring in two runs and give the Angels a 2-1 win.

The Sox rebounded the next night to win 6-2, and lost the following night, 5-2. So Sunday's game was an important one, as dropping three in Anaheim to start an 11-game road trip just wouldn't be acceptable. The Sox did absolutely nothing against the Angels for eight innings, and looked pretty lethargic in the process. But they rallied in the ninth, as Mookie Betts singled in a run, and with two outs and two on, Dustin Pedroia hit a ball off Huston Street over the center field wall and Xander Bogaerts hit a solo shot to give the Red Sox their biggest win of 2016, 5-3. (As a matter of full disclosure, I was writing a very different ending to this blog post, as the top of the ninth had just begun when I started writing.)

It was the biggest win of the season to conclude the month of July.

As July finishes up for the Sox, they are 57-46,  1 1/2 games behind in third place in the AL East. Overall, July was a successful month for the boys, having gone 15-10. They still have seven games on the West Coast, four in Seattle and three in LA with the Dodgers. I would consider a 6-5 road trip a very successful one if they can manage it.

And now we wait for the trade deadline to come, as it will be at 4 PM ET tomorrow. Will the Sox make a big splash, or just add a few more solid pieces like Brad Ziegler or Aaron Hill?
Posted by The Omnipotent Q at 7:54 PM No comments:

Today, Ken Griffey Jr. and Mike Piazza will be inducted into the Baseball Hall of Fame at Cooperstown. Both are highly deserving of the honor.

Griffey made it on the first ballot, getting over 99% of the vote, the highest in history. (Three voters left him off. Lord knows why.)

Griffey has a glowing resume, one that I will not rehash here. But Junior will be wearing something special as he gives his speech.

Griffey has a special relationship with the family of a firefighter who gave his life on September 11, 2001. Kenny Marino was one of 343 of New York's Bravest who perished that day, and Griffey was his idol. Shortly after 9/11, the Cincinnati Reds received an email from Katrina Marino, Kenny's widow, explaining who much Griffey was her husband's idol, and how much it would mean to her family if Griffey could hit home run that night against the Phillies.

He did just that, and it led to a bond between Junior and the Marino family. Here's more about it from 2004. The Marino family also has a website, where you can read more about Kenny, his legacy, and about the family's relationship with Ken Griffey: www.kennymarino.com.

As Griffey takes the podium today, he will be wearing a bracelet with Kenny's name on it. It will have been supplied by my good friend Vicki Chapman Peaslee of Bracelets For America. I got to know Vicki shortly after the 9/11 attacks, when she started the company. She makes bracelets in memory of the 9/11 victims (which she has since expanded for many other types of remembrances, such as for those who gave their lives in the wars in Iraq and Afghanistan). Every day I wear a bracelet she gave me in memory of my dear friend Joyce Carpeneto. It has become a part of me, and I can't imagine not wearing it.

Ken Griffey is without question one of the classier players ever to wear an MLB uniform. It's his special day today, and I'm sure his biggest fan, a hero named Kenny Marino, will be looking down and smiling with Junior today.
Posted by The Omnipotent Q at 11:33 AM No comments: 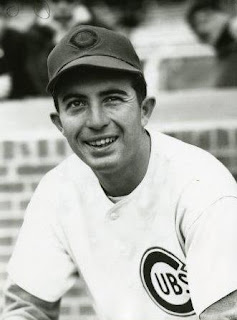 "Handsome Ransom Jackson" is a very good read about one of those players who had a solid, if not spectacular career during one of MLB's golden eras.
Posted by The Omnipotent Q at 11:55 AM No comments:

First Half Ends On a High Note

The Red Sox ended the first half this past weekend with an important 9-game homestand that I figured would tell a lot about this ballclub.

I feared they would have a mediocre or lousy one, and especially with two of three teams among the bottom feeders of the American League.

But the month of June was put in the rearview mirror, and the Sox went 7-2 in those games to begin July. And it has no doubt taken a lot of the pressure off manager John Farrell. For now.

The two losses were brutal: the 21-2 debacle against the LA Angels, and the 7-2 loss to Texas when Craig Kimbrel gave up 4 runs while facing 4 hitters and the Sox left 14 men on base.

But the seven wins put the Sox back on course. The starting pitching has still been shaky (and will be addressed further as we get closer to the deadline), as the Sox staff allowed four or more runs in the first seven games of the homestand. But Rick Porcello and David Price both pitched gems in the final two games before the break, and the Sox concluded the first half at 49-38.

The offense flashed back to May, as they scored 10 or more runs in three of the nine games. Dave Dombrowski made a terrific move after the Texas series by acquiring veteran infielder Aaron Hill from Milwaukee for two minor leaguers. He immediately proved dividends by getting two hits and two RBI in Friday night's win over Tampa Bay. Hill is a terrific upgrade to the bench, which was very weak due to all the injuries.

And Dombrowski upgraded the pen by trading for veteran reliever Brad Ziegler from Arizona. He acted swiftly after Craig Kimbrel's knee injury landed him on the DL, and he will be back by early-to-mid August. Ziegler had 17 saves for the D-Backs this season, and can fill either a closer or set up role.

It has been an up and down season for the Sox so far. They ended the first half with four straight wins, and are 2 games behind Baltimore in the AL East. 2016 has been a marked improvement over the last two years, as in 2014 they were 9 games under .500 and 9 1/2 games back at the break, and last year were five games under .500 and 6 1/2 games out of first.

The Red Sox will play at home for most of the rest of July, but have a tough schedule for August and September. 40 of the last 62 games will be on the road, and that will include two trips to the West Coast, one in August and another in September.

18 days to go until the trade deadline. The trades of Hill and Ziegler were both surprises. And I bet Dombrowski has more in store.
Posted by The Omnipotent Q at 12:01 PM No comments: