Time To Expand The Vote

As you all know, Jeff Bagwell, Tim Raines and Ivan Rodriguez were all elected to baseball's Hall of Fame on Wednesday. All three are deserving and worthy Hall of Famers.

Rodriguez made it on his first time out, and just made it by a single percentage point, as he garnered 76% of the vote. This was Bagwell's seventh year on the ballot, and Raines' tenth (and final one of eligibility). Both made it with over 86% of the vote. (Here is the complete vote.)

Trevor Hoffman just missed election with 74% of the vote. If just 5 voters had voted for him who didn't, he would be in as well. First-time candidate Vladimir Guerrero got 71.7% of the vote, or just 15 votes short of induction.

I have been writing for years that it is time for the Hall of Fame voting to be expanded. Right now, Hall of Fame voters have a maximum of ten candidates they can vote for. I've never understood the logic of keeping it at just ten, especially when we are in an era of many quality candidates up for election. Two years, a number of voters revealed they left both Pedro Martinez and Randy Johnson off their ballots for the sole reason that they figured both were shoo-ins for election, and wanted to give support to other candidates they felt wouldn't get enough because of the limited number of candidates one could vote for.

I thought the Hall would take action on this matter, and do something to prevent this from happening again. They did nothing.

I am all in favor of expanding the vote to making it unlimited, and one can vote for as many worthy candidates as they see fit. Ryan Thibodaux, on his excellent Hall of Fame Tracker (of the public votes before the announcement), also lists the candidates were left off the ballots by voters but would have voted for should the ballots had been larger, and those that revealed that generally would have voted for 2 of 3 more candidates. So, if unlimited isn't possible, why not expand it to 12 of 15?

An expanded ballot might have put both Hoffman and Guerrero in. Both should make it with no problem next year.

But the case of Jorge Posada is an interesting one.

He was a first-time candidate, and he received just 3.8% of the vote, so he will no longer be considered by the writers. He needed 23 votes, which would have been 5% to have kept him on the ballot next year. He came up six votes short of that. This isn't to say Posada would have gotten my vote, but I would bet with an expanded vote he would have gotten those six votes and maybe more. He was a victim of a loaded field.

I hope the Hall will still consider letting the writers vote for more candidates, as more worthy players will be up for election soon, and the fact that both Roger Clemens and Barry Bonds' numbers continue to increase as the years progress.
Posted by The Omnipotent Q at 12:08 PM No comments: 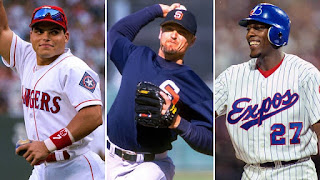 Anyway, the announcement of the Class of 2017 will be made tonight at 6 PM on MLB Network.
Posted by The Omnipotent Q at 11:16 AM No comments: