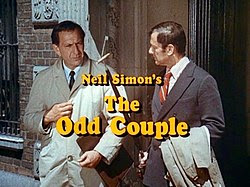 A few years ago, I put up a post on my blog about my favorite Twilight Zone episodes, and it seems like just about every day I get someone googling about the classic show and winding up on my blog. Another one of my all-time favorite TV shows is "The Odd Couple." It is one of those shows I never get tired of watching, even if I have seen just about every episode 100 times. The quality of the show has stood the test of time.

I even had the pleasure of speaking to Ron Friedman, the esteemed TV writer who wrote a number of Odd Couple episodes. (His most famous is the Christmas episode from the first season.) His son-in-law is one of the BLOHARDS, and we were together at my friend Joe's house last Thanksgiving, and he called him and we chatted for a few minutes. A very nice man.

Anyway, here is my list of my favorites from the catalog of 114 shows, that ran on ABC from 1970-1975. Like I did with The Twilight Zone, they will be in order that they were first broadcast. (And I had a tough time narrowing down my favorites, so extended this list to 25.)

#6 "Oscar's Ulcer": Oscar has an ulcer, and Felix prohibits him from chasing women and playing poker. (Any show involving Oscar's ulcer was hysterical, in my opinion.)

#11 "Felix Is Missing": Felix gets a rush call for a job in Canada, and Oscar doesn't realize it and thinks Felix is missing. The great Albert Brooks makes one of his early appearances as Rudy Mandel, one of Felix' clients.

#12 "Scrooge Gets An Oscar": The only Odd Couple Christmas show, as Oscar refuses to act in a Christmas play, and has a terrible nightmare he's Scrooge.

#13 "The Blackout": $50 goes missing when the boys are playing poker, and Felix is certain Oscar stole the money.

#23 "What Does a Naked Lady Say To You?": Felix is dating a librarian, but Murray discovers she's really an actress in an all-nude play.

#27 "Hospital Mates": Felix and Oscar end up in a hospital together, Felix with an operation on his nose and Oscar with an injured foot.

#32 "The Fat Farm": Felix and Oscar check into a health spa together, where Oscar cracks.

#33 "The Odd Couple Meet Their Host": Oscar goes on a talk show with David Steinberg and ridicules Felix, and he demands equal time.

#37 "Felix The Calypso Singer": Felix and Oscar go down to a Caribbean island, and when Oscar's girlfriend Nancy announces she can go while they're down there, Felix has to leave.

#41 "You Saved My Life": Oscar saves Felix's life, and Felix won't stop thanking him for it.

#58 "Password": Felix and Oscar go on the TV quiz show "Password" together. One of the all-time best.

#63 "The Ides of April": Felix gets called into the IRS office and is convinced he's on his way to jail.

#64 "Myrna's Debut": Myrna is convinced she can become a tap dancing star and enlists Felix's help in making her dream come true.

#66 "My Strife In Court": Felix and Oscar get nailed for ticket scalping and wind up in court, which features the infamous "assume" moment.

#69 "Take My Furniture Please": Felix gets the great idea to bring in all-new furniture to the apartment, but Oscar hates it and brings in his idea of "new furniture."

#70 "The Murray Who Came To Dinner": Murray walks out on his wife, and moves in with Felix and Oscar.

#75 "The Odd Holiday": Another flashback episode, when Oscar, Felix and their wives take a vacation to the Caribbean island of Hockaloma, and it costs Felix his marriage.

#78 "The Songwriter": Felix writes a song, "Happy and Peppy and Bursting With Love" for actress/singer Jaye P. Morgan.

#79 "Felix Directs": Felix makes a documentary "Mondo Filth", about Oscar, and a friend of Oscar's suggests he direct his movie.

#83 "A Barnacle Adventure": Oscar's inventing dentist gets the boys to invest in his barnacle glue invention.

#86 "The Flying Felix": Felix is suddenly afraid to fly, and Oscar does all he can to get him back on an airplane.

#93 "The Rain In Spain": Felix tries to change Myrna to get her back with her old boyfriend Sheldn (yes, with no "O", as it was left off his birth certificate). Features one of the show's funniest moments at the end, when the boys meet Myrna's brother and sister.

#108 "Felix The Horse Player": Oscar finds a sure way of winning at the horses, and brings in Felix as his partner.

#114 "Felix Remarries": In the show's final episode, Felix and Gloria get back together and get married again.

With thanks to both Jack Klugman and the late Tony Randall. They made magic for five years together.
Posted by The Omnipotent Q at 12:35 PM