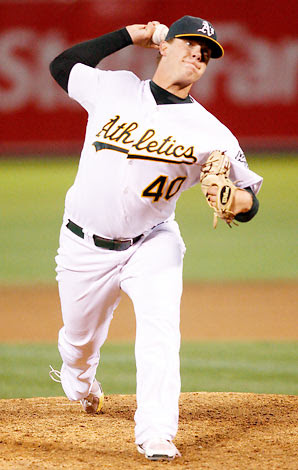 The Red Sox appear to have landed a new closer in Andrew Bailey, as according to Buster Olney, the Sox will send Josh Reddick to Oakland as part of a deal to get the Athletics' closer.

Bailey is 27, and has been the Oakland closer the last three years. He has had some elbow problems in the past, but I'm guessing that's not worrying the Red Sox brass.

The Red Sox will also acquire outfielder Ryan Sweeney, and they will send two single A players, first baseman Miles Head and pitcher Raul Alcantara, according to Extra Bases.

And also, old friend Hideki Okajima reached a minor league deal with the Yankees, and will be invited to spring training to try and make the club. The Yankees were about five years too late on Oki, as his pal Hideki Matsui recommended that they sign him before the 2007 season, but they passed on him. The Red Sox grabbed him, and he was a vital part of the 2007 championship team.
Posted by The Omnipotent Q at 4:58 PM