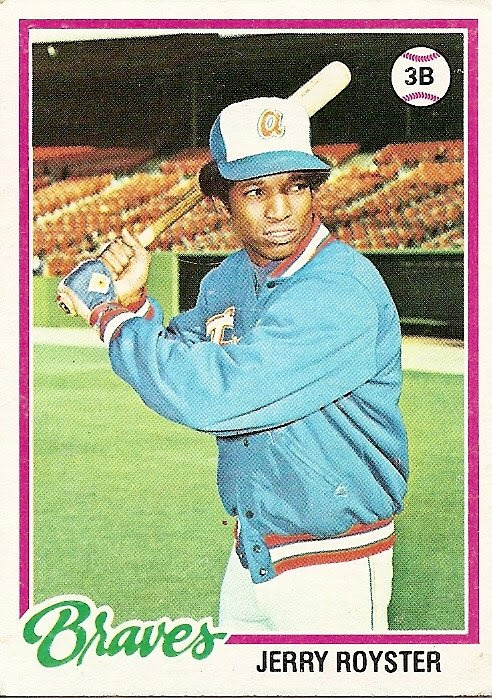 Red Sox fans won't have to worry about Tim Bogar screwing up sending base runners to the plate anymore, as he will become Bobby Valentine's bench coach in 2012. DeMarlo Hale, the former bench coach, will be the Orioles third base coach next season.

Other coaches joining his staff will be Bob McClure, the long time reliever who was the pitching coach in Kansas City last season, and Jerry Royster, a 16-year veteran utility man, who will become the third base coach.

As a member of the Braves back in the early 1980s, Royster made one of the greatest catches I've ever seen, reaching high over the wall at Fulton-County Stadium to steal a home run. "This Week In Baseball" used to show it on their opening montage every week. (And that was a huge wall they had in that park.) Unfortunately, I couldn't find a YouTube clip or a still shot of it, so his baseball card here will have to do.

Unfortunately, Bill Buckner will NOT be on Bobby Valentine's staff, as he accepted a position as a coach with the Cubs Single A affiliate in Boise, Idaho, where he currently makes his off-season home.

Still no word on who will become the Red Sox' closer next season, with Daniel Bard moving to the rotation. They are still talking with free agents Ryan Madson and now Francisco Cordero, but nothing seems imminent with Christmas fast approaching.
Posted by The Omnipotent Q at 10:09 AM