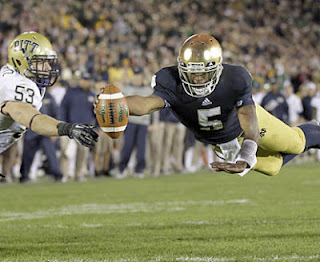 But just barely for Notre Dame.

It looked for all the world like underdog Pittsburgh was going to pull the upset on the Fighting Irish on Saturday. The ND offense looked sluggish, and could get little going on offense for nearly three quarters.

It was 20-6 Pitt late in third quarter when the Irish showed signs of life, as T.J. Jones caught an 11-yard TD pass from Everett Golson as the fourth quarter started. But Kyle Brindza, who had not missed a PAT all season, shanked the kick wide left, and it was 20-12.

With four minutes to play, Golson was picked off in the end zone, and it looked like the dream was over. But Pitt went three and out, and ND went down the field, and with just over two minutes left, Golson found Theo Riddick in the end zone to make it 20-18. The Irish went for two, and Golson ran it in (pictured) to tie it up at 20-20.

Both teams exchanged field goals in the first OT. In the second, Pitt had a chance to win it after Cierre Wood fumbled on the one yard line. But Kevin Harper's 33-yard field goal went wide right and the Irish were still breathing.

Pitt kicked another FG to open the 3rd OT, and the Irish drove down the field, and from the one-yard line, Golson sneaked it in to give the Fighting Irish their ninth straight win of 2012.

It sure wasn't pretty, but championship teams find ways to win games like this. ND was clearly outplayed by a tough Pittsburgh team. Sometimes it's better to be lucky than good.

The two ranked teams ahead of Notre Dame, Alabama and Kansas State, both won, so the Irish figure to stay at number three in the BCS rankings.

Next up for the Irish next week is Boston College at Chestnut Hill.
Posted by The Omnipotent Q at 11:11 AM