"Brooklyn Dodgers: The Ghosts of Flatbush" 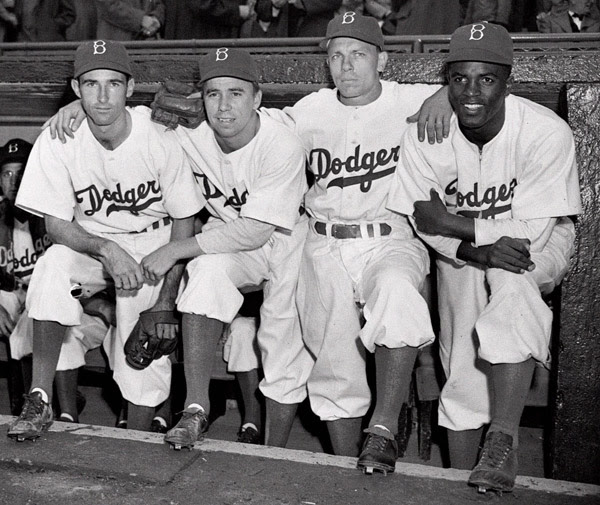 This past week on HBO, a documentary film debuted called "Brooklyn Dodgers: The Ghosts of Flatbush." I didn't get a chance to see it during the week, as I was busy with the Red Sox games and other assorted things. But earlier today, I had a chance to see it. I'm really glad I did. It is simply one of the best documentaries ever made about baseball.

As many of you know, I am a descendant of Brooklyn Dodger fans. Both my parents, my aunts and uncles, as well as my grandparents, were loyal fans. I knew this was a film I had to check out. As I write this, I live just ten minutes on the subway from where Ebbets Field once stood. (My dad saw the film the night it debuted, and said it was very well-made.)

"Brooklyn Dodgers: The Ghosts of Flatbush," narrated wonderfully by Liev Schreiber, is a history of one of baseball's most beloved teams, but it is centered on the years 1947-1957, the teams that were nicknamed "The Boys of Summer." Jackie Robinson's arrival in baseball in 1947 is the starting point, and the bitter departure of the team after the 1957 season closes it out. The team is shown in archival footage, and through the eyes of many of those people who remember it well or have an intimate connection to the club.

Unfortunately, many of the key people of those years are no longer living, but we are blessed with the remembrances of such players as Johnny Podres, Carl Erskine, Duke Snider, Ralph Branca, and Clem Labine (who died shortly after the film was completed). Rachel Robinson talks about her husband's entry into baseball, Joan Hodges about her late husband Gil, and we also hear from celebrity Dodger fans like Larry King, Louis Gossett and Pat Cooper. There are also authors and others who've studied Brooklyn Dodger history adding their two cents as well.

The differences between baseball back in the 1950s and today are shown in vivid detail. Many Dodgers lived in Brooklyn year-round (Gil Hodges lived 11 blocks from my house), and worked jobs in the winter. Back then, Brooklyn players felt like a part of your family, and you saw the same players on the team all the time (but of course, players were literally chained to the clubs they played for and couldn't leave voluntarily, as free agency was still a generation away).

It is a compelling two hours. All of the key moments in Brooklyn Dodger baseball history are recalled, like Robinson's MLB debut, losing the pennant on the last day in 1950, the epic 1951 playoff, losing the World Series to the Yankees in 1952 and 1953, and the glorious triumph of the 1955 championship. I couldn't help but draw parallels to the modern day Red Sox on two occasions. The 1951 NL pennant loss to the Giants reminded me of Game 7 of the 2003 ALCS (both the Dodgers and Red Sox had three-run leads late in both games, only to see both games lost on home runs), and the championship of 1955 brought to mind the Red Sox epic triumph of 2004. (Both teams had finally gotten past the Yankees, and their staunchly devout fan bases finally got to an enjoy a championship.)

And of course, this documentary would not have been complete without a breakdown of the events that led to the Dodgers leaving Brooklyn for Los Angeles. I thought the handling of owner Walter O'Malley ("That sonofabitch" as my dad refers to him to this day) was rather fair. He is not painted as "The Devil Incarnate," nor is he shown as some glorious visionary. (But I love a joke one person tells in the documentary. Goes like this: "If you were in a room with Hitler, Stalin and Walter O'Malley and had a gun with just two bullets, what would you do? Simple, shoot O'Malley twice.") New York City planner Robert Moses is made out to be more of a villain here, as he rejected O'Malley's bid to acquire land at Atlantic and Flatbush Avenues to build a new stadium. Moses was the most powerful man in New York in the 1950s, and if he had approved it, the Dodgers never would have left.

The Dodgers were a unifying force in the borough of Brooklyn, and they brought people together of all backgrounds. But by the late 1950s, the borough was changing, and O'Malley taking the Dodgers to California changed it forever. It broke Brooklyn's heart, and it's never been the same since. It's something the borough has never recovered from, and never will. It's a terribly sad ending to this terrific documentary (of course it had to end this way). O'Malley and the Dodgers find gold in California, but Brooklyn continues into decline. I had tears in my eyes as Frank Sinatra's "There Used To Be a Ballpark" plays as the film concludes.

I would highly recommend that if you are a fan of baseball history you check out this documentary. Back in 1986, I went to Fenway Park for the first time. After the game, I called my dad in Brooklyn, when I got back to my motel room. One of the first things I said to him was, "Now I have an idea what it was like to see a game at Ebbets Field." One of the regrets I have in regard to baseball is I never had a chance to go to a game there. (I was born four years after the Dodgers left.)

"Brooklyn Dodgers: The Ghosts of Flatbush" will make you feel the pain of the loss all the more, whether you were ever at Ebbets Field or not.
Posted by The Omnipotent Q at 6:26 PM

& Moses LOVED his name all over something:

Shea Stadium was part of the legacy;

As a lifelong Red Sox fan, I've ALWAYS felt a kinship to the Brooklyn Dodgers, and never more so after 2004.

I'm sure that Gil, Jackie, Pee Wee and few others hoisted a cold one on that special night in 2004...

I've always been a Brooklyn Dodgers "fan". A great regret of mine, as a baseball fan, is that I'll never actually be able to be in Ebbetts Field. Of course, I was born in the last year they were actually in Brooklyn...

& I've written on this subject:

I cried before, when I was finished;

Fenway, in Part, does.

According to Wikipedia, Robert Moses planned a huge Parking Garage for where the Dodgers were going to build:

Can you tell me who the three other guys with Jackie Robinson are in the picture in this post?