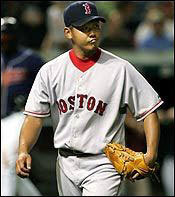 There was a great pitchers duel last night at Jacobs Field, between Daisuke Matsuzaka and C.C. Sabathia, and Dice-K and the Sox came out on top, winning, 1-0, as they boys from Boston won their fifth straight game and remain 7 1/2 up in the AL East.

I really enjoy low-scoring, well-pitched games like last night (and especially when my team comes out on top). I think they are just as good, if not better, than 10-9 games. Dice-K pitched seven strong innings, allowing just 4 hits, and Hideki Okajima and Jonathan Papelbon continue to be the best 1-2 combo in any MLB bullpen in securing The Dice Man's 12th win.

Oh, and by the way, when was the Yankees last 1-0 win this season? Can't say I can recall even one.

It was also "Kayreoke Night"at Professor Thom's, as fans got to call the action for a half-inning at a time. I was the host of the festivities, and as an added bonus, a film crew was in to film us for a documentary being made about the 2007 Red Sox. Everyone had a good time last night, and especially because the Red Sox prevailed.

Mike Lowell's bloop single in the fourth proved to be the difference, driving in Kevin Youkilis. Red Sox Nation was also in full voice, as thousands of Sox supporters filled the stands. I read online where many Indians fans were annoyed by it. But let's face the facts. If the Indians were playing a team like the Mariners or Blue Jays, there would be far fewer fans in the stands, and the multitude of Sox fans puts money into the coffers of the Indians management (so I doubt they will publicly complain). If they want to keep the Sox fans away, they should buy up all the tickets and not sell any to Red Sox fans looking to go. But even then, many fans can make good money to those fans looking to get in. The Almighty Dollar is always a big lure.

Wherever the Red Sox go, their loyal supporters follow. That's a fact of life these days. Get used to it.
Posted by The Omnipotent Q at 11:49 AM

And note: Not just "these days," as we always followed the team way before '04. I always like to clear that up since people will try to claim it's just bandwagoners. But if anything, the fact that it's 3 years after the championship and it's still going strong means these are the real fans.

Also, in that telecast of the 9/30/1967 game on the Impossible to Forget DVD (which I saw wen they aired it on NESN), the great Ken Coleman is heard talking about the support for the Sox at Fenway "as well as in the other cities we've traveled to this year." (Paraphrasing.) I know you know this, but I always feel the need to clarfiy, mainly so people know this isn't bandwagoning.