Schilling Calls Out McGwire and Bonds 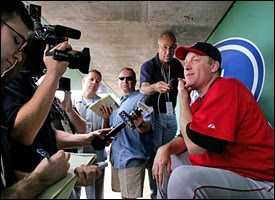 It certainly was an interesting interview that Curt Schilling gave to Bob Costas the other night on "Costas NOW." As we all know, Schilling is never shy about offering his opinions on everything under the sun. He's a polarizing subject, as there are those who love him and those who intensely dislike him. The camera goes on him and the mouth gets moving.

But I am with Curt on the latest bruhaha. Costas asked him about Mark McGwire and Barry Bonds and the whole circus surrounding steroids. Schilling, who appeared with McGwire before Congress in 2005, basically said that since he dodged questions that day about any possible steroid use, he was basically guilty of being a user. "If someone wrote that stuff about me and I didn't sue their ass off, am I not admitting that there's some legitimacy to it?," Schilling said to Costas.

I find it interesting that NONE of those players accused of steroid use, either in the terrific "Game of Shadows" book, or the Jose Canseco's "Juiced" expose of steroids, has sued the authors (players such as Ivan Rodriguez, Juan Gonzalez, McGwire or the now-infamous Rafael Palmeiro). If they are really clean and have been defamed in those books, why haven't they gone to court over it? (Because if they did, EVERYTHING would come out in open court.)

The fact that McGwire hasn't said "no" when asked about steroid use in the past convinced Schilling he's got something to hide. (McGwire simply ruined his Hall of Fame chances with that ill-advised "non-denial.") Bonds' reaction to the HBO show on steroids was something you'd expect from this classless jerk, and he went after the show's host: "Costas is a little midget who knows jack shit about baseball." (Costas has been critical about Bonds breaking Hank Aaron's home run record, and said in a roundabout way that Bonds was a steroid user the other night.) Nice. ("Little midget?" Is there such a thing as a big midget?)

Whether you like Schilling or not, it's hard to argue with his point. The fact that Bonds and McGwire have dodged all the steroid allegations and have done absolutely nothing to try to repair their reputations tells me there's much more to this story than either is letting on.

Just read "Game of Shadows" and see if you still believe Bonds isn't a juicer.

Redsock at Joy of Sox has a very different take on Schilling's comments. Clearly, Redsock isn't a big fan of Schilling's mouth. (He's not alone there.) The post reads like it was written by someone who was so upset about the state of things in the US, that he moved to Canada. Hmmm.

Nevertheless, he makes one good point: "I can't believe Schilling doesn't realize there are myriad instances in which a lawyer would advise his client not to answer a certain question, even if the charges against that client are totally inaccurate."

That said, the lack of libel suits is a bit telling.

I also wonder if Joy of Sox really did bale to Canada because of everything happening here...

I still believe that the fact that NO ONE has sued either Canseco or the "Game of Shadows" authors says a lot..

I also believe that a lot of the bashing Schilling gets from Red Sox fans comes from those fans who don't like the fact he's a George W. Bush supporter...