"Sports Songs and Beyond" 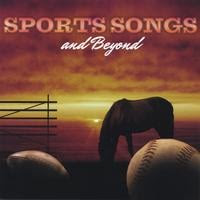 A few months ago, I began a correspondence with a gentleman named Joe Pickering, Jr. He found my web site, and he told me he is a songwriter, and that he is part of two CDs centered around sports. The first was called "Baseball Songs Sports Heroes," and the second called "Sports Songs and Beyond."

The first CD has been featured on the Fox Network, in an HBO movie and on many TV and radio shows. The CD is now included in the National Baseball Hall of Fame Sound Library. The first CD has built quite a pedigree.

Joe sent me a copy of his second CD not long ago. (It has also been accepted into the Baseball Hall of Fame Sound Library as well.) I was impressed with "Sports Songs and Beyond." This CD has a great variety on it. It's not simply a baseball or sports music CD. Joe, a devoted Red Sox fan, wrote three specific songs about the Red Sox, "Hell Freezes Over!", "Wait 'Till Next Year" and "This Is Your Season To Remember." Phil Coley does a nice job on vocals, and the CD has a definite "country" and laid back feel to it.

Other songs on the CD are about the Chicago White Sox ("Let Buck Back In") and the New York Yankees ("The Curse of the Bambino Is Back"). That latter song is about the Yankees losing the 2004 ALCS as seen from the eyes of a frustrated Yankee fan. (Isn't that the best kind?) "Sports Songs and Beyond" also includes songs about the New England Patriots, Dallas Cowboys, baseball in Philadelphia and Washington, and about his love of the rodeo. The CD concludes with three Christmas tunes.

Joe's done a nice job with the CD, and I'm proud to support his efforts. You can find more about it at his web site, King of the Road Music: http://www.kingoftheroadmusic.com/. Joe is currently working on his third CD, and it includes a tune I'm proud to say was inspired by me and other Red Sox fans (as Joe told me) living "behind enemy lines" here in New York and New Jersey, "The Bravest Red Sox Fans." Joe recently sent me an advanced copy of the song. (Nice job, my friend!) I encourage you to check out Joe's site.

It's not every day I inspire someone to write a song!
Posted by The Omnipotent Q at 5:36 PM