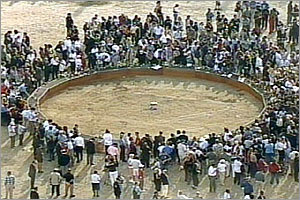 Earlier last week, I received an email about the upcoming 9/11 Memorial Remembrance at Ground Zero this September 11. It now appears that the loved ones of the 9/11 victims will not be able to go into the site, as the City of New York now feels that because of the ongoing construction inside the site, the official remembrance will have to be moved. It will be in Zuccotti Park, which is across the street on Liberty Street, between Broadway and Church Street.

This is a terrible mistake the city is making.

The footprints of the World Trade Center site is simply hallowed ground, and sacred territory. For thousands of people who lost someone they loved that day, going back to site to remember them is a special pilgrimage. Over 2700 brave and innocent souls lost their lives there that terrible morning in 2001, and over 1100 of them disappeared, and their families have nothing of them and no place to properly grieve.

I have been there for all five ceremonies, and I can testify that it is an incredibly sacred place. On the first anniversary in 2002 (pictured, "The Circle of Honor"), it was a life-changing day for me. 20,000 people went down into the site that day. Many like me return there every year on the day. My life stops cold that day, and everything takes a back seat to the special remembrance that takes place inside the site. I feel it is a special and sacred duty to be there every year on that date.

The city wants the ceremonies to take place at Zuccotti Park. That will simply be a logistical nightmare, as thousands of people, and not just those who lost loved ones, will be around the site to remember the victims. I can't imagine how they will accomodate so many people in such a small area. The park is relatively small in comparison to the site across the street. There are many safety and security issues raised by this move as well.

And besides, people travel from all over the country and the world to be there on September 11 to properly and with dignity remember those loved ones they lost. I was by the site earlier this month, and while the construction continues at a rapid rate, there is still room on the footprints to allow the victims' families and friends to remember the victims. I don't understand why the city can't stop construction for little more than half a day to allow this to happen. Of course, the day will come that it will no longer be possible to do that, but I would hope the city would reconsider this plan.

The city has also not said if there will be any access to the site on the day of the remembrance. It would be a terrible thing if the city doesn't allow at least that. I hope the city will listen to the families and allow them access to the spot where their brave loved ones lost their lives in the worst terror attack in American history.

They owe the families at least that much.
Posted by The Omnipotent Q at 2:05 PM

I am visiting from Melbourne, Australia and looking to contact city authority in relationship to 911 remembrance p;lans for 2008.

Mr. Healey: I'm not sure exactly who to contact about the 2008 9/11 remembrance plans, but you may want to check out the NYC Mayor's official web site for more details: http://www.nyc.gov/

Hope that helps, and best of luck with your plans.