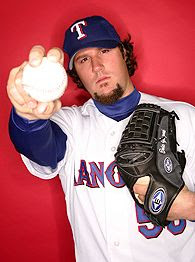 The Red Sox made a great trade today at the deadline, dealing lefty pitcher Kason Gabbard and minor league outfielders David Murphy and Engle Beltre to Texas for closer Eric Gagne. The Sox added Gagne to an already superb bullpen.

Gagne had the right to turn the deal down, but he waved his no-trade clause to become a setup man for Jonathan Papelbon. Gagne gives the Sox plenty of insurance, especially if Mike Timlin's shoulder is a real problem. Gagne will see plenty of action setting up, and will probably also get some closing opportunities from time to time as well.

I hated to see Kason Gabbard go, but he will get a chance to pitch full-time in Texas. Murphy will get more of a chance to play there than in Boston, and Beltre is an extremely young outfield prospect who is many years away.

This deal tells me the Sox are going for it now, and reinforced their already strong pen. The possible deal for Jermaine Dye did not materialize (sounds like he might re-sign with Chicago), I was sorry to see they did not make any kind of deal for a fourth outfielder, and they didn't move Wily Mo Pena. Oh well.

It was still an exciting day to be a Red Sox fan.

And did anyone else notice the Yankees actually subtracted from their bullpen, and didn't add any veteran to bolster their mediocre pen? Very curious indeed.
Posted by The Omnipotent Q at 4:24 PM

And Mo Rivera cried out last evening for bullpen help. But they have bats that work! Ours, right now, run out of batteries every other day!

& there's a GAPING Hole in The Bronx:

Pitching did the Yankmes in the past few years