Welcome Back to The Show, Jon 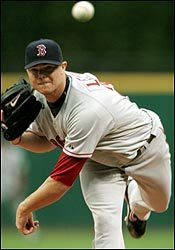 On an emotional night last night in Cleveland, Jon Lester returned to majors for the first time since last August, when he was diagnosed with cancer. Lester was command for six solid innings as the Red Sox scored early and often for him, and won, 6-2.

He threw 96 pitches and struck out six. His parents were watching behind the Cleveland dugout, and each time they showed them on TV, his mother looked to be on the verge of tears. It was that kind of night.

Just seeing Jon Lester on a major league mound again was a great thing. To see him pitching so well was just an added bonus. He surrendered a two-run homer to Grady Sizemore in the third, and got into a bases loaded jam in the fourth with one out, but got a grounder back to the mound and forced the runner at the plate, and then struck out Sizemore to end the threat.

His fastball and curve both looked great. The fourth inning was the only serious trouble he was in all night. The bullpen did another superior job, with Mike Timlin, Javier Lopez and Manny Delcarmen putting a lid on the Indians. Delcarmen also picked up his first save of the season.

It was also a big night for Coco Crisp, who had four hits and scored three runs. Manny Ramirez doubled in two runs, JD Drew singled in one and another scored when Mike Lowell banged into a double play. It was 4-0 before Lester took the mound. (It was nice to see the crowd, including many Red Sox fans, giving him a nice hand when he first went out there.)

It was a great night overall for the Red Sox, who remain 7 1/2 games up in the AL East. But it truly belonged to Jon Lester, who made a nice return to the majors after a frightening battle with cancer. It's good to have him back, and but most especially, cancer-free.
Posted by The Omnipotent Q at 12:09 PM

& It was Jon's Performance which was solid & it was his scheduled 9/2 start, that due to the diagnosis of 9/1, never occured:

Grand to have him back