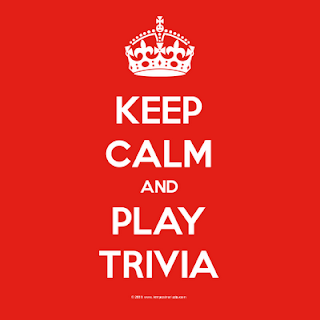 It has been three weeks since our last Trivia Night at Professor Thom's, which was on October 23rd. We've had a hurricane, a presidential election and a snowstorm (albeit a relatively minor one). But, no matter how they try to stop us, Trivia Night will finally be back in the saddle again tomorrow night at 8:30 PM.

The Special Category will again be "Pop Music Trivia," which we would have done last week. It will be seven questions about music done during more recent times. The Q Train lightning round will be "Horror Movies Trivia." I will give you the names of ten classic horror films, and you will tell me the decade they were first released. And if you can give the exact year, I will give you an extra point. (BTW, remakes are not included in this category. Just originals.)

The Sneak Peek question for this week is:
"The Country Music Hall of Fame is located in what US city?"

We get rolling at 8:30 PM. I've missed all you guys, and hope everybody got through the last few weeks in good shape. Hope many of you can come out tomorrow night as Trivia Night at Professor Thom's gets back on its feet again!
Posted by The Omnipotent Q at 12:01 PM