A New Cog In The Clubhouse 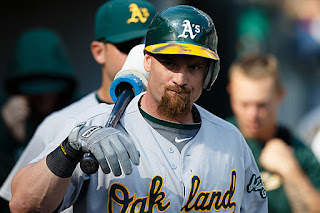 Could Jonny Gomes be the second coming of Kevin Millar?

Couldn't help thinking of KFC when I heard the Sox signed Gomes to a two-year, $10 million deal earlier this week. Gomes is a platoon player at best, as his numbers against lefties in 2012 was very good (.299 average), while against righties leaves a lot to be desired (.209). He's not a good outfielder, but neither was Millar.

Gomes is 32, and known as a very good clubhouse guy last year with the overachieving Oakland A's. I'm sure the Red Sox took that highly into account in making this move. What this means to the Sox bringing back Cody Ross is still to be seen, as they are very similar type players. Ross is looking for a three-year deal, while the Sox don't appear to budging to anything past two. Ross is also a good clubhouse personality, and as we have seen over the past two years in Boston, you can't undervalue that at all.

Gomes is probably just a cog in the rebuilding of the Boston Red Sox. The fans weren't jumping for joy over this move, but I don't recall and hooting and hollering when Kevin Millar signed with the Red Sox in 2003. I'll reserve judgment and see what they do next.
Posted by The Omnipotent Q at 11:48 AM