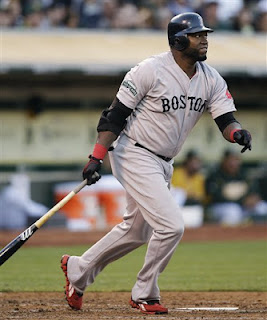 To the surprise of just about no one, David Ortiz and the Red Sox agreed to a two-year, $26 million deal, with incentives that could reach $30 million.

Rumors surfaced yesterday that the Texas Rangers had some interest in signing Papi, and the Sox had until midnight to lock him up, or he would hit the open market.

All of the other Red Sox eligible did indeed become free agents, including Cody Ross, who the Sox showed real interest in signing to a new deal.

The other free agents are: Aaron Cook, James Loney, Vicente Padilla, Scott Podsednik and Daisuke Matsuzaka. The only ones I could possibly see returning are Padilla and Ross.
Posted by The Omnipotent Q at 11:37 AM