With Thanks To Baylor and Stanford 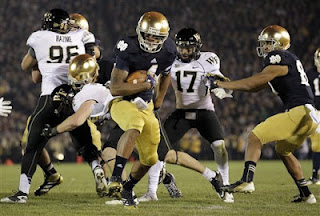 It was a walk in the park for Notre Dame yesterday, as they easily handled Wake Forest, 38-0, on Senior Day. This was the kind of game that worried me, with ND a heavy favorite with a big rivalry game to follow the following week.

There was no reason to be concerned.

Cierre Wood ran for a 68-yard TD on the Irish's first possession, and scored again after recovering a Forest fumble. Everett Golson threw the first of three TDs, and he threw for 346 yards on the day.

Wood rushed for 150 yards on 11 carries, including his opening TD burst.

The win makes the Irish 11-0 on the season, with just USC left on the schedule next Saturday.

And the Fighting Irish had some spectacular news later in the night, as the two undefeated teams in front of them both lost, the first time the number 1 and 2 teams in the country both lost on the same day. Number 1 Kansas State was hammered by Baylor, 52-24. It was the first time an undefeated team was beaten by a team under .500 in BCS history.

And number 2 Oregon lost in overtime to Stanford, 17-14 at Oregon.

So now, without question, Notre Dame will be ranked number 1 when the BCS polls are released later today. They are the last unbeaten team in the BCS. (Ohio State is also 11-0, but are on probation and not eligible.) A win over USC would assure a place in the BCS title game in Miami in January.
Posted by The Omnipotent Q at 10:59 AM