No Percy Harvin? No Problem. 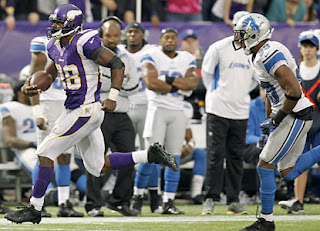 Sunday's game against the Detroit Lions was a must-win for the Vikings, with the brutal schedule they have in front of them. (Two with Chicago, two with Green Bay and one with Houston and St. Louis still to go.)

Rookie Jarius Wright stepped in for Harvin, and promptly caught a three-yard TD pass on the Vikings' first drive from Christian Ponder to give them a lead they would never give up. Wright also caught a 54-yard pass to set it up, which was the first catch of his career.

It would be a nice bounce back game from Ponder, who went 24-for-32 for 221 yards and 2 TDs. He hit Kyle Rudolph with a 20-yard TD in the fourth quarter, and the Vikings went for a 2-pt. conversion, and was successful, as Adrian Peterson ran it in and made it 24-10.

Harvin sat out the game with an ankle sprain, and with the off week this week, he should be back for the next Vikings game on November 25th against Chicago at Soldier Field. The Bears loss put the Vikings 1 1/2 games behind the leaders of the NFC North.

The win broke a two-game losing streak put the Vikings at 6-4. They don't return to the Metrodome until they play Green Bay on December 9th.
Posted by The Omnipotent Q at 11:42 AM