Getting Some Dignity Back 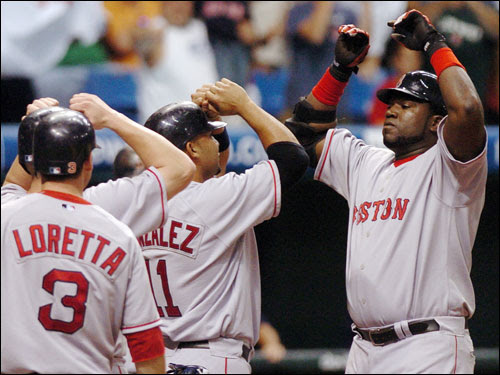 No four-game sweep by the Devil Rays in Tampa last night. The Red Sox getting swept in St. Petersburg? That sounds too much like one of those nightmares you get after eating too many anchovy pizzas before sack time. David Ortiz hit two home runs, including a grand slam in the ninth inning to give the Red Sox a 12-5 win, as Tim Wakefield won his seventh game of the year. It was big because the Yankees won in Cleveland, giving them a split with the Indians, and they are still 3 games back in the AL East due to the Sox victory.

Now the Red Sox head into Chicago for a three game series with the White Sox. The Sox (sorry Ken Harrelson, the boys from Boston are THE SOX on this blog!) will throw Jon Lester, Josh Beckett and Curt Schilling at Chicago, while they will counter with Mark Buehrle, Freddy Garcia and Jose Contreras. (I have all six pitchers in my fantasy teams except Contreras, so I'll be hoping for some low scoring games this weekend.) The Yankees are in Tampa for three games, so we all become Devil Rays fans this weekend.

I saw an interesting piece in the Rush & Malloy column in today's New York Daily News about Judas and his past marijuana use. Johnny Damon was/is a pot head? That just couldn't be true! For more of the juicy details:
http://www.nydailynews.com/news/gossip/story/433176p-364964c.html
Posted by The Omnipotent Q at 11:51 AM

David Ortiz & 6 RBIs is key, while A-Fraud is a Glorified Pepsi-Pusher.

Is that why Damon talks funny & a 6th Grade Girls's Arm in CF?

Announcement from NY Mets Mgr, Willie Randolph, is that Jose' Lima has been designated For Assignment:

Don't get any ideas;

Bad enough with Rudy & Julia in the 'pen!