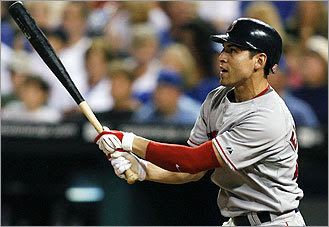 It was another big night for Jacoby Ellsbury (pictured) last night in Kansas City, as he had three hits including a big three-run homer as the Red Sox won the series over the Royals with another 8-2 win. He also made a fabulous defensive play in center to save a run early in the game as well.

Ellsbury had been struggling big time going into the series, and actually didn't start on Monday night. But he went deep for the first time since June 15th, as he hit a blast to dead center off Ron Mahay to ice the win. He was batting in the seventh slot for the first time, and Terry Francona said he will move him back to leadoff again when Ellsbury is ready.

He sure looked ready last night.

Tim Wakefield pitched six solid innings in allowing just two runs to get his 7th win of 2008. It looked like it might be another night when the Red Sox wouldn't score for him, as it was scoreless into the fifth. But with two outs, Alex Cora started the rally with a single. J.D. Drew walked, and Jed Lowrie, who continued his impressive turn at the plate, doubled in two runs. David Ortiz singled him in to finish the scoring that inning. The Sox added two more in the sixth to make it 5-2, before Ellsbury's slam in the 7th.

Kevin Youkilis left the game in the first after being hit in the right wrist with a pitch. X-rays were negative, and like all of us in this life, is day-to-day.

Tampa Bay won, scoring six in the ninth to beat the Indians, 10-7, so the Red Sox remain 3 back. The Sox begin a four-game "wrap around" series in Chicago tomorrow after an off day today. BTW, did you hear about the spectacular game Jeff Karstens pitched in Arizona yesterday for the Pirates? He retired the first 23 batters before Chris Young doubled to end the perfect game. He pitched a two-hitter for a 2-0 win. He's 2-0 and hasn't given up an earned run in 15 innings for the Pirates. Do you think the Yankees would like to have him back? So much for the theory that the Yankees gave up nothing in that trade with the Bucs last month.

And a reminder to all of you in the New York area. We will be having a screening tonight at Professor Thom's of the documentary film, "Blessed! Still We Believe 2" in the bar's Loft. It's free, and it begins at 8 PM. Yours Truly appears in the film with some of my friends, and I'll be on hand for tonight's viewing.
Posted by The Omnipotent Q at 9:53 AM