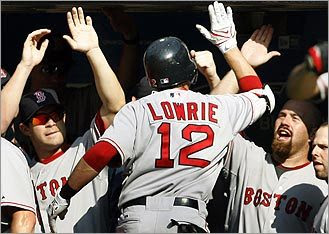 For the first time all year, I missed two Red Sox games in a row. I was visiting some friends on Long Island, who didn't have the baseball package, so I had to follow the Sox game in Toronto on my trusty cell phone.

I sure was happy to see the Red Sox pulled out a 6-5, 11-inning win at Rogers Centre. Jed Lowrie (pictured) connected for his second career home run as the Red Sox came from behind twice. It was a mediocre start for Daisuke Matsuzaka, who went six innings and gave up five runs.

There were highlight reel catches from Jacoby Ellsbury and Jason Bay, and home runs from Coco Crisp and Dustin Pedroia. (Has anyone mentioned Dusty as a possible MVP candidate? I just did.) Jonathan Papelbon got the win after pitching two scoreless innings, with Manny Delcarmen getting his first save of the season.

The Red Sox gained a game on Tampa Bay, as they lost in Chicago. They are 3 1/2 games out of first, and lead the Wild Card by one over Minnesota, and five ahead of New York.
Posted by The Omnipotent Q at 9:42 AM