Shipping Up to Portland 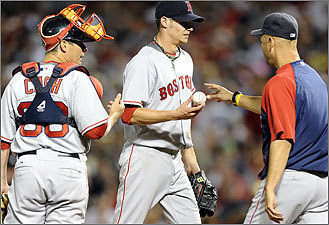 Clay Buchholz may have made his final start for the Red Sox in 2008, as he was optioned to the Portland Sea Dogs after last night's latest disaster, an 11-6 loss to the Orioles at Camden Yards. No replacement for him has been named yet, and the Red Sox will call up someone tomorrow.

It was the 7th straight loss for Buchholz, after the Red Sox staked him to a 4-0 lead after two innings. It was also the third straight game the Sox scored him runs in the first, and he wound up losing all three. Here's the ugly truth of Buchholz's last nine starts since his recall from Pawtucket: 42 innings, 62 hits, 27 walks, 39 strikeouts, 9.21 ERA, no wins. Yikes.

It's the best thing for the kid right now. His confidence is just about shot. You could see once the Orioles started rallying in the second for three that the game was heading downhill fast for him. Buchholz will go down and work with Portland's pitching coach on getting a number of things fine tuned. It wouldn't surprise me if he spends the rest of the 2008 campaign in the minors.

Buchholz is a kid with a ton of talent, and no one should give up on him. Baseball history is full of guys who've gotten off to tough starts and bounced back to have great careers (Tom Glavine jumps out right away). I think because he threw the no-hitter in just his second start that that raised the expectations of the Red Sox and their fans very high for him.

He's a top of the rotation pitcher. Just give him time. He'll be back.

For the third time in eight games, the Red Sox gave up double-digit runs to the opposition, and once again the bullpen was awful, allowing at least six runs in all three of those games as well. Not good. It got to the point where Alex Cora was throwing in the bullpen in the eighth inning (Terry Francona eventually stuck with Hideki Okajima for that inning.) The bullpen continues to be an Achilles heel for the Red Sox. David Aardsma came into the game after Buchholz was pulled in the third, and promptly gave up a three-run homer to make it 7-4, and Javier Lopez also gave up a three-run shot in the fourth to basically put the game away for Baltimore.

Now it's off to Toronto, where Paul Byrd gets the ball tomorrow night. Josh Beckett being pushed back a few days actually sets up the rotation nicely for the Yankees series. Jon Lester and Daisuke Matsuzaka will complete the Toronto series, and in New York it will be Beckett, Byrd and Lester. (The two off days on the road trip really helps right now, and the Sox don't need a fifth starter until the Chicago series next weekend.) Originally, Beckett and Lester would have missed the New York series.
Posted by The Omnipotent Q at 11:02 AM