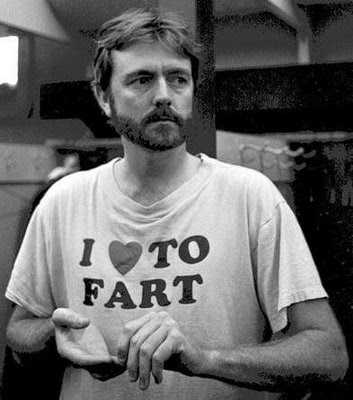 I've always believed that one of the great injustices in the baseball Hall of Fame balloting has been the fact that Bert Blyleven has yet to be selected. Along with Jim Rice, Luis Tiant, Gil Hodges and Tony Oliva, I think he should be enshrined at Cooperstown.

Blyleven currently does the Minnesota Twins games on FSN North as a color commentator. Since I got the MLB package a few years back, I've been able to watch some games he does. He's actually a good listen, as he brings a good knowledge of game and especially pitching, along with a biting sense of humor. He's a favorite of the Twins fans, as they love holding up "Circle Me Bert" signs at games for Blyleven to write a circle around them.

But at the BLOHARDS meeting the other day, I saw the above photo as part of their slideshow. I did some further research, and as it turns out, Bert is one of those guys who actually does like to break wind and isn't shy about letting the world know about it.

The good folks over at Deadspin had an article about this last May: "A Mighty Wind: Bert Blyleven Loves to Fart."

It's really a very funny interview. You won't find too many media types who'll go on the record about their enjoyment over passing gas. And it turns out that Bert still has that shirt he's wearing too.

Blyleven's always been a real character. He seems like the kind of guy you'd love to hang out with in a bar and just hear his old baseball war stories. And maybe even let a few rip.
Posted by The Omnipotent Q at 10:15 AM