A Great Start For Bay 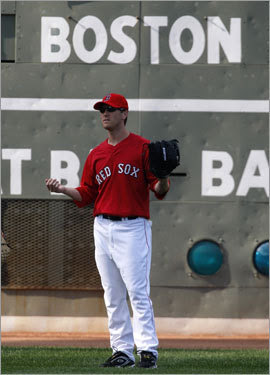 It was really important for everyone concerned that newly-acquired Jason Bay get off to a good start for the Red Sox. And he made a statement in his first game last night against Oakland.

Bay received a huge ovation in his first at-bat in the second inning, Red Sox Nation's way of welcoming him to the team. He promptly drew a walk, and then moved to third on J.D. Drew's double. He then scored on Jed Lowrie's sacrifice fly to make the score 1-0.

It looked like that would hold up, as the score remained 1-0 until two outs in the eighth. Hideki Okajima gave up a pop fly home run to Jack Cust that barely made it to the top of the wall to tie the score. It took away a win for Tim Wakefield, who pitched 6 1/3 innings of shutout ball and got a no-decision.

The Red Sox had opportunities to win it, which included Jed Lowrie flying out with the bases loaded in the 10th with two outs. But with two out in the 12th, Bay hit a ball that on TV looked like it was going out. But it just went midway up the wall and Bay legged out a triple. After an intentional walk to Drew, Lowrie became the hero when he hit a ball up the middle that Bobby Crosby had trouble getting a handle on, and Lowrie beat the throw to first to give the Red Sox an important 2-1 win. Tampa Bay won, and New York lost, so the Red Sox remain three games back in the AL East.

It was an emotional day as the Sox turned the page on Manny Ramirez, and brought Jason Bay on board. He went 1-for-3 with two walks, a hit batsman, and scored both runs. He also made a nice sliding catch in left to save a run. (BTW, did anyone else notice that Bay is wearing number 44, the same number Orlando Cabrera wore when he came over exactly four years ago? The parallel continues to be striking.)

Also, Ramirez went 2-for-4 in his Los Angeles debut. But he banged into a double play in the ninth to kill a rally, and the Arizona Diamondbacks went on to win, 2-1.

And guess who Ramirez replaced on the Dodgers roster to make room for him? Yep, Nomar Garciaparra, who's been put on the DL for about the 200th time since leaving Boston.

I'll say it again. The parallels are striking.
Posted by The Omnipotent Q at 10:42 AM