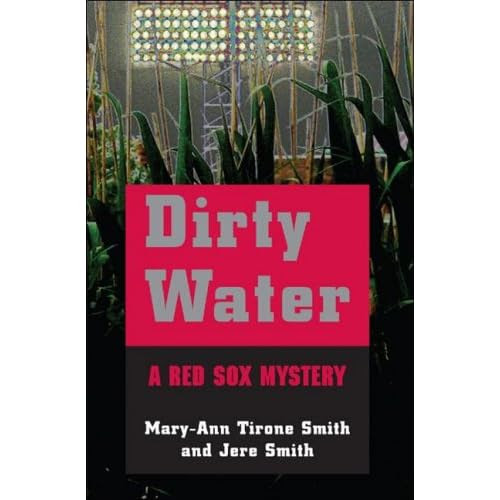 I recently finished a new novel that will be coming to a bookshelf near you next month. It's called "Dirty Water: A Red Sox Mystery," and it is by "The Poppy Rice Mysteries" author Mary-Ann Tirone Smith and her son Jere.

As a matter of full disclosure, I have known Jere for a few years, as he has a terrific blog that I check out daily, "A Red Sox Fan From Pinstripe Territory." I first met Jere when we both went to a screening of the Michael Keaton film "Game 6," about a Red Sox fan from New York living through Game 6 of the 1986 World Series.

Jere was also kind enough to ask me to write something about him in the introduction of the book, which I was very pleased to do.

So with all of that of out of the way, I really did enjoy the book he collaborated on with his mother. It is a fictional story with many real people in the book. It is a mystery that begins when an abandoned month-old boy is discovered in the Red Sox clubhouse at Fenway Park during the 2007 season. He is brought to the hospital and is named "Ted Williams" by the hospital staff.

The central figures of the book are two Boston detectives, Rocky Patel and Marty Flanagan. A number of other events occur after the baby's discovery: a woman turns up dead in the shadow of Fenway; a young Dominican pitcher for the Red Sox AA team goes missing; and a player's agent gets caught up in a weave of blackmail over Cuban baseball players.

It's up to the detectives to connect the dots and figure exactly why these events are all related to each other.

There is also a mystery blogger, who runs a Red Sox fan site, who seems to have information taken directly from someone inside the Red Sox front office. The Smiths have a blog passage at the end of each chapter from the mystery man, and use some real-life bloggers in the fictional posts (including Yours Truly).

The detectives, with valuable help from the blogger, begin putting the pieces together, and it leads to a final confrontation that wraps the whole story up. I don't want to give too much away, but the Smiths have put together a fascinating story of murder, blackmail and intrigue.

The book will be released in early September, and if you'd like to preorder the book through Amazon.com, please go here.

Jere has also put together a blog for his book, and you can the progress of the book here as well.

The Smiths are rightly proud of their book and it was such a pleasure to read it. I wish them all the best with the book, and if you enjoy reading murder mysteries and like a bit of baseball thrown in, I know you'll enjoy their fine novel.
Posted by The Omnipotent Q at 11:08 AM