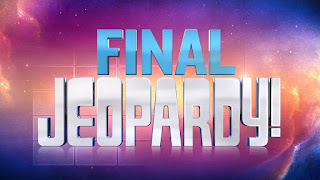 Trivia Night returns after last week's hiatus this Tuesday night, June 12th at 8:30 PM, with "Final Jeopardy Potpourri Trivia" as the Special Category. It will be seven questions that have appeared as the final question on the legendary game show "Jeopardy!" over the years, and it will be on various topics (hence the "potpourri" in the title). And don't worry, you don't have to put your answers in the form of a question. The Q Train lightning round will be "Red, White and Blue Flags Trivia." In honor of Flag Day later this week, I will give you the names of ten countries from around the world, and you have to tell me whether that country has red, white and blue in its nation's flag.


The Sneak Peek question for this week is:
"What is the stretch of water between Russia and Alaska called?"

Looking forward to seeing many of you this Tuesday night for what should be a great night of Trivia Q&A!
Posted by The Omnipotent Q at 11:04 AM