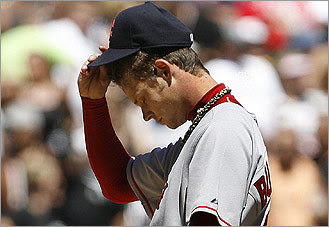 With the news that Tim Wakefield will be out for at least two starts, the Red Sox needed Clay Buchholz to come up big against the White Sox on Sunday. And once again, it didn't happen.

Buchholz continued his terrible slump, losing his 6th straight decision, while his ERA in those starts is just over 8.00. He got hammered for three home runs, all bombs, as Chicago won the third game of the four-game series, 6-5.

Looked like the day would be a good one for the Red Sox, as Mike Lowell hit a thre-run homer in the first to get the Red Sox going, and Buchholz disposed of Chicago with no problem in the first. But the ominous signs were there as the Red Sox left two runners in scoring position in the second, and Buchholz gave up a home run to Jermaine Dye in the bottom of the inning.

Chicago tacked on four in the third on two two-run homers by Carlos Quentin and Jim Thome. That made it 5-3. The White Sox added another run, and the Sox got the deficit to one in the sixth. But they had the bases loaded in the 7th with one out, but Lowell banged into a DP to end the threat, and for all purposes, the day for the Red Sox.

I said it a couple of weeks ago, and I'll say it again now. I love Buchholz and he will be a top-of-the-rotation starter one day. He's just not ready now. I'm not sure if the Sox should stick with him now. It's clearly not doing his confidence any good right now. I really hoped the Red Sox would have gotten a 5th starter at the deadline on July 31, but it didn't happen. I would guess Theo Epstein tried, but the prices were probably so extortionate and I know he didn't want to sacrifice any quality young talent to do it.

Bartolo Colon should be back soon. He pitched three shutout innings in his rehab on Sunday. But for tomorrow, the most likely replacements for Wakefield seem to be either Devern Hansack or Michael Bowden, who are both at Pawtucket.
Posted by The Omnipotent Q at 11:30 AM