Dice-K Baffles the Other Sox 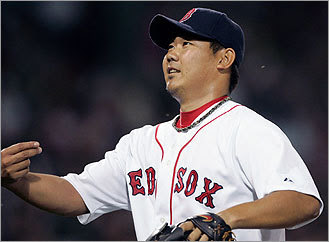 Daisuke Matsuzaka won his 16th game last night, in what was arguably his best performance of the season as the Red Sox whacked the White Sox, 8-0, on their return home after a very successful road trip.

Despite not having Mike Lowell, J.D. Drew, Sean Casey, Josh Beckett and Coco Crisp (out last night with flu-like symptoms), the Red Sox made it look easy against Chicago. They are just so deep and resilient, and are finding ways to win.

Dice-K tied the record for most wins in MLB in a season by a Japanese-born pitcher, which was set by Hideo Nomo. He is now 16-2. He went eight innings last night, striking out seven and allowing just two hits while walking two. He was never in trouble, as the offense gave him all the support he needed from the first inning.

Dustin Pedroia had four hits, along with a walk and two stolen bases, and David Ortiz had three hits as well. Kevin Youkilis had two hits and three RBI. Jason Bay was having a tough night, with two strikeouts, until his blow put the game out of reach. The Sox were up 4-0 with the bases loaded with two outs in the sixth when Bay blasted one off the wall to clear the bases and put the Sox up, 7-0.

Pedroia also scored twice, and broke Bobby Doerr's 1950 team record for runs scored by a second baseman. Dusty now has 104 runs scored, and you have to think he will now start getting some MVP votes with the spectacular year he is putting together.

Tampa Bay won over Baltimore, and Minnesota won in Oakland, so the Red Sox remain 4 1/2 behind the Rays in the East, and 2 1/2 up on the Twins in the wild card race.

Before the game the Red Sox got some good news about Josh Beckett's elbow, as there appears to be now damage inside, as he visited Dr. James Andrews in Alabama yesterday. They did place him on the DL also, but he will only be on it for another week, as he has not pitched since August 17th. He will start in Texas next weekend. The Red Sox also placed Sean Casey on the DL with his continuing neck pain, and brought up catcher David Ross. They will bring up highly touted rookie Michael Bowden from Pawtucket tonight to make his MLB debut.
Posted by The Omnipotent Q at 10:48 AM