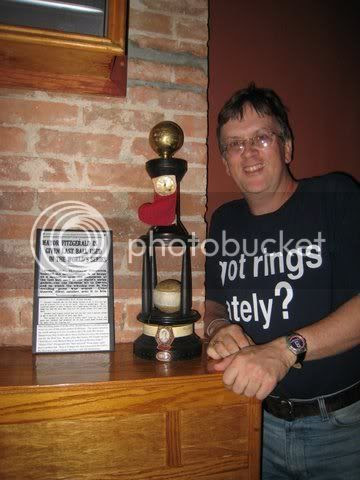 Last night was a really special night at Professor Thom's, as we had a public viewing in The Loft of "Blessed! Still We Believe 2." We had a nice turnout of folks who came in and enjoyed the film. Many of us who appeared in the film, like my friends Chris Wertz, Chris Johnson (who looks amazingly like David Ortiz), Matt, Eric and a few others came out to check out the film. It was great to relive those special memories once again.

But after the film, I was introduced to Peter Nash, who is an author and a filmmaker, and he produced the splendid documentary "Rooters: The Birth of Red Sox Nation." He had a special surprise for all of us in The Loft last night.

He brought in the actual 1912 Red Sox World Series championship trophy. (Actually it's not an "official" trophy, as MLB didn't give out an official WS trophy until 1967.) It's a really small trophy, but it is nearly 100 years old, and in the middle contains the actual ball that Red Sox infielder Larry Gardner hit for a sacrifice fly in the 10th inning to win Game 8 (there was one tie that year) and the Series for the Sox.

Like the 2004 and 2007 Red Sox championship trophies, we all took turns taking pictures with it (and there I am). Peter told us some great stories about the trophy. It was originally given to Sox manager Jake Stahl back in 1912 by Boston mayor John "Honey Fitz" Fitzgerald, who was John F. Kennedy's grandfather.

My thanks to Peter for bringing it in and letting us get some photos with a real piece of Red Sox history.
Posted by The Omnipotent Q at 6:31 PM