One Byrd Beats a Team of Birds 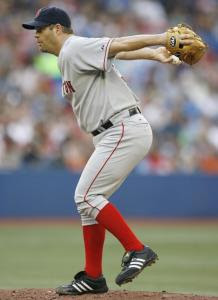 Paul Byrd did last night exactly what the Red Sox have wanted him to do: give them six innings and leave with the lead. And that's just what he did, as the Red Sox went on to an 8-4 win in Toronto last night. It was just the third win by the Red Sox over Toronto this season, and they have now won 3 of the first 4 of the current road trip.

Byrd gave up two two-run homers, to Alex Rios and Lyle Overbay, but left with a 6-4 lead after six. The bullpen shut Toronto down over the final three innings.

Dustin Pedroia hit a home run in the first, and in the fourth, the Sox scored four, mostly due to the wildness of Blue Jays' starter Shawn Marcum. Jason Varitek continued his resurgence, hitting a homer in his third straight game and getting on base four times. he's now 7 for his last 16.

The Sox put it away in the eighth with two insurance runs to get Byrd his first win in a Red Sox uniform.

It was also revealed yesterday that J.D. Drew has a herniated disk in his back, but he feels he might not need to go on the DL. It is similar to what he went through in St. Louis in 2001. The MRI he had yesterday was actually encouraging, as the Sox feel that once the spasming around it subsides, Drew can play. When is anyone's guess right now.

The Red Sox also signed catcher David Ross, who was released earlier this week by Cincinnati. He figures to be up in September for extra catching insurance when the rosters expand.
Posted by The Omnipotent Q at 10:57 AM