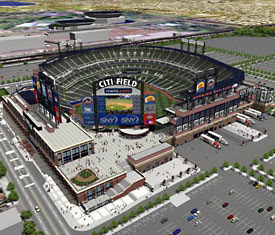 The Red Sox will have the pleasure of being the road team for the very first game of the brand new Citi Field the Mets are opening next season.

They will play the Mets in two exhibition games on the eve of the 2009 season, and the games are tentatively scheduled for April 3rd and 4th. The Mets will play they first regular season game there on April 14th against the San Diego Padres. (Road trip, Peggy and Ken?) The Mets open their regular season in Cincinnati next season.

Here's more about it from the Providence Journal.

The Red Sox will then open the regular season in 2009 at home against Tampa Bay, and it will be just the second time they will open at home in the last dozen years. (Although Sean McAdam is wrong in the ProJo story. The Sox didn't open the 2005 at home. They opened it at Yankee Stadium.)

You bet your sweet life I'll be there for one, if not both, games.
Posted by The Omnipotent Q at 10:56 AM

That would be awesome but I would imagine tickets are going to be tough for the home opener at a new stadium. But it doesn't cost anything to think about it!

I immediately thought of you and Peg when I heard that the Mets will open the regular season with your Friars next April. I'm sure it will be murder trying to land tickets.

But you never can tell what will happen,Ken...