Banner Night For the Red Sox 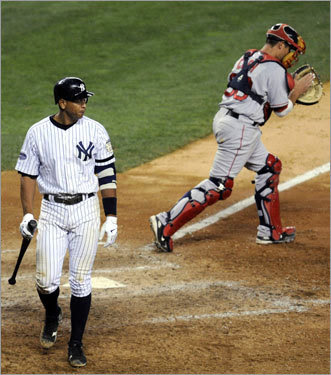 The night started out last night with some bad news: J.D. Drew was placed on the DL with the herniated disk in his back. It's not known how long he will be out. But the rumors about a trade with the Braves for outfielder Mark Kotsay tells me that Drew's injury maybe more serious than originally feared.

But the bad news ended there. Tim Wakefield gave the Sox exactly what they needed last night. He went five innings, gave up just three runs, two were cheap-ass home runs down the rightfield line to Johnny Damon. He left with a 6-3 lead, and turned it over to the Red Sox pen, which kept the Yankees off the board the rest of the night, although they did threaten in almost every inning but the ninth. It was Wake's 8th win in 2008.

Jason Bay led the 14-hit attack with two hits and two RBI. Coco Crisp had three hits and stolen base, and scored from second base on Jeff Bailey's infield single when Jason Giambi brainlocked at first after Bailey beat Alex Rodriguez's throw.

But the story of the night was not Andy Pettitte's lousy outing for the Yankees, but the one A-Rod had at the plate and in the field. He went 0-for-5, banged into 2 double plays, left seven men on base, made an error, and for good measure, ended the game with a strike out. He was booed lustily by the Yankee fans all night, and even heard it when he threw out a Red Sox runner on an easy grounder in the 8th. In the 7th, he came up with basically the Yankee season on the line: bases loaded, one out, and down 7-3. On Justin Masterson's second pitch, he grounded to Alex Cora for an easy DP to end the threat.

It was a bit of a nervous night at times for the Red Sox fans, but the pen came through big time in an important game. At Professor Thom's, we were joined by Jerry Casale, the former Red Sox pitcher. He was holding court with myself and my friends, telling stories and about how much he dislikes the Yankees. He was passing out his old Red Sox baseball card too. Jerry's recovering from a stroke he had late in 2006, but he was in good spirits, and we all enjoyed being with him.

For the Red Sox, it was a night that everything clicked. The offense, the pitching, and especially in the standings. The Rays and Twins also lost, so the Sox trail Tampa Bay by 3 1/2, and lead Minnesota by 2 1/2 in the Wild Card. The Yankees also fall deeper into the crater they've created for themselves. It's looking pretty bleak for them right now.

Don't be surprised to see more Red Sox fans at the final two games at Yankee Stadium this week.
Posted by The Omnipotent Q at 9:52 AM

Loved seeing Wake get a win in NYC.

Very happy to see Wake come off the DL and get a much-needed win. Especially in THAT place.