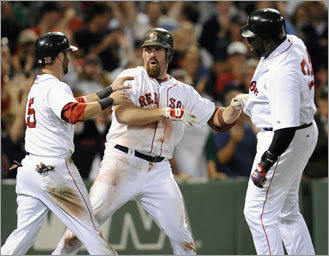 No, it really wasn't a football game, but the score sure seems like one.

The Red Sox jumped all over Texas starter Scott Feldman for 10 runs in the first inning, capped by two three-run homers by David Ortiz. But I had a strange feeling it might not last, as Texas came right back with two runs off Charlie Zink, the knuckleballer making his MLB debut. (He must have thought it was Christmas morning with that first inning.) The Rangers can hit, and could chip away at this lead.

Zink got through the next two innings, but it all fell apart on him in the 5th. Terry Francona left him out there a little too long, and finally yanked him with the score 12-6. He was sent back to AAA after the game to make room for Paul Byrd. David Aardsma came on and gave up a three-run homer to Ian Kinsler and it was 12-10.

It was truly a wacky night for Kevin Youkilis. He struck out twice in the first inning and made two errors (one at first and one at third). But he atoned for that with two HRs and five RBIs, including a three-run shot in the eighth to put the Red Sox ahead to stay.

Texas came all the way back to take a 16-14 lead in the seventh. Although the Red Sox managed to escape with a win and most fans can laugh about a 19-17 win, you can't ignore that the Red Sox bullpen got absolutely torched. They combined to give up 9 runs, and only Hideki Okajima, who pitched a scoreless eighth and got the win, pitched well. (Even Jonathan Papelbon had to make it interesting in the ninth, giving up a run.)

Papi became the fourth Red Sox player to hit two HRs in an inning, and the third to get 6 RBI in one. Texas became the fourth team in history to lose a game when scoring at least 17 runs. Feldman became the first pitcher to give up 12 runs in a game and NOT lose since 1918.

It was one screwball night. Let's hope Jon Lester restores some order tonight and gives the bullpen a break. They could use it.
Posted by The Omnipotent Q at 11:32 AM