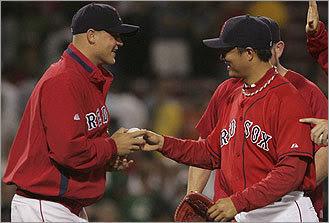 Dustin Pedroia had his second consecutive four-hit game in leading the Red Sox to a convincing 8-2 win over the White Sox at Fenway Park last night.

It was an historic night for the Red Sox second baseman, as he hit in the cleanup spot for the first time in his career. He was actually walked intentionally in the eighth inning. Dusty is now leading the AL in hitting right now as well.

Last night was also the MLB debut for Michael Bowden, the impressive young pitcher who began this season at Portland (pictured getting the game ball from Hideki Okajima). Bowden gave Terry Francona exactly what he needed last night. He went five innings, gave up two runs, seven hits, walked one and struck out three. Facing a tough hitting Chicago club, he showed great poise as he was in difficult situations in three of the five innings he pitched. He clearly merits another start, and we'll see if gets another in Texas next weekend.

Bowden is now the last of the top five Red Sox draft choices of 2005 to make it to the majors. He joins Jacoby Ellsbury, Jed Lowrie, Craig Hansen and Clay Buchholz as youngsters who are part of one of the club's best drafts in its history to make an impact at the MLB level.

Kevin Youkilis was out of the lineup yesterday, with a bug that seems to be going around the team. So that got Pedroia in the four-hole. Jeff Bailey launched his first career MLB homer, a soaring shot into the centerfield bleachers. Mark Kotsay, batting fifth with great career numbers against losing pitcher Mark Buehrle, had two doubles and three RBI. Jason Bay continued his hot hitting in the first with a two-run double that staked Bowden to an early 3-0 lead.

The Sox remained 4 1/2 back of Tampa Bay in the East, who won a slugfest over Baltimore, 10-9. Minnesota lost in the ninth to Oakland on an error that let in two runs, 3-2, so the Twins are now 3 1/2 games behind the Sox in the wild card. And the Yankees continue to fade away, blowing a four-run lead in the seventh to the Blue Jays, 7-6. They now trail the Sox by seven, and Tampa Bay by a whopping 11 1/2 games.
Posted by The Omnipotent Q at 11:22 AM