It May Be a Clean City, But We Swept Toronto Anyway 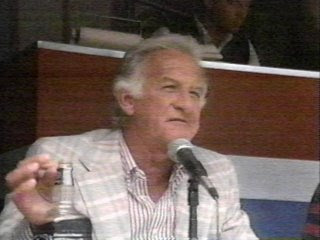 My calendar says that April is coming to a close, so that means one thing: the Jon Lester we all know and love should be back in form.

And he sure was on Wednesday night, as he allowed just one hit and struck out 11. Lester simply dominated, and Daniel Bard struck out the side in the eighth, allowing a hit. And Jonathan Papelbon as simply lights out again, getting Toronto 1-2-3 for his seventh save, and Lester's first win of the season, 2-0. It was the first sweep by the Red Sox this season.

Another superb start by the rotation. I was getting worried there for a while.

Brett Cecil was terrific for the Jays, allowing just a sacrifice fly to Dustin Pedroia in the sixth and an RBI single to Darnell McDonald in the seventh.

The Sox now head to Baltimore and take on the Birds Friday night, with John Lackey on the mound.

Speaking of one hit (or should I say, "What, one goddamned hit?"), I wish all the best to my favorite ersatz Cleveland Indians broadcaster, Harry Doyle (pictured), also known as Bob Uecker. Ueck is having heart surgery on Friday, and I wish him godspeed and hope he returns to the booth soon.
Posted by The Omnipotent Q at 10:57 PM

Get Well soon, Ueuck!! Three months to recover from an aortic valve replacement.

One of the truly good guys. I always call the last row of the stadium "Ueucker Seats" after his commercial line "I'm gonna be sitting in the front row!"