"Red Sox By The Numbers" 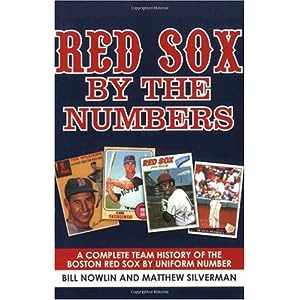 If you are a Red Sox fan who enjoys knowing who wore what number and when, then the book for you is "Red Sox By The Numbers."

The Sox have been wearing uniform numbers since 1931 (so the answer to the question, "What number did Babe Ruth wear with the Red Sox?" is "none.") and the book covers each man who wore a number, and the chapters breaks down by every number.

The book is written by Bill Nowlin and Matthew Silverman. I've had the pleasure of meeting Bill at Fenway Park last year, and he has written many terrific books about the team. 17 to be exact. (He is also a founder of Rounder Records, the great roots label.) Matthew Silverman also wrote the book "Mets By The Numbers."

The book also has a lot of good humor, and it also lists every player to wear that number, including managers and coaches. And it will have many facts you've probably never known. Such as: "Who were Johnny Peacock and Lou Finney?" They were the two players who wore number 9 in 1944 while Ted Williams was away in World War II. (I'm still amazed the Sox gave away the numbers for players, especially Ted, who away fighting in the war.) Or: "Who wore number 8 before Carl Yastrzemski?" That would be the immortal Ed Sadowski. (Yep, him.)

There's an interesting interview with Joe Cochran, the clubhouse man who gives out the Red Sox numbers. And the authors also chatted with every player from the 2009 Sox about why they wear the numbers they do.

The Sox have issued 74 numbers to over 1,500 players. And just about all of them are covered. Bill Nowlin and Matthew Silverman have done a tremendous job bringing even the most obscure Red Sox players some fame in a very interesting book. (It is currently available. Click the following link to go to amazon.com.)

I highly recommend "Red Sox By The Numbers." I also enjoyed the first line from the press release the publishing company, Skyhorse Publishing, who sent me with the book: "If you hate the Yankees and your favorite number is 2004, then this book is for you!"

It sure was for me.
Posted by The Omnipotent Q at 4:56 PM