Do We Have To Sweat The Orioles? 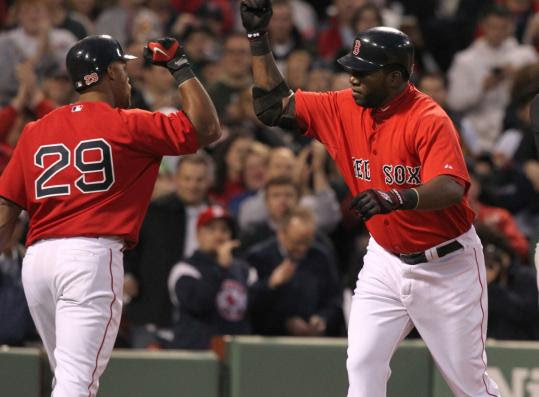 That was my pal Joe's query last night as I was at Professor Thom's watching last night's game during my friend Ruth's cancer benefit (which was a lot of fun). And the answer to Joe's question last night was "yes."

So far, we're sweating everybody this month, no matter where they are in the standings.

David Ortiz banged his first home run of the year, and Jon Lester was certainly better than his last outing, going 5 2/3 innings and didn't allow a run. He left with the bases loaded and two outs in the sixth, and Daniel Bard got the final out to keep the shutout intact.

But he gave up a two-run shot to Adam Jones in the seventh, and Baltimore tied it with a run on a groundout in the eighth. Despite being 2-14, teams like the Orioles scare me, as they really aren't as bad as they appear, and they will start winning games. Never take them for granted.

The Red Sox scratched out a run in the bottom of the inning on a single, two groundouts, an intentional walk, a four-pitch walk to David Ortiz, and Adrian Beltre drew another walk to get the Red Sox the lead back.

Jonathan Papelbon had some drama in the ninth. He got the first two outs (one when Nick Markakis was thrown out at second trying to stretch a single into a double) but walked the next two (one intentionally after a stolen base) before former Red Sox pariah Julio Lugo struck out swinging to end the game, 4-3.

Another nail biter the Red Sox put their fans through last night. Once again, the faithful could use a laugher and soon. John Lackey takes the ball at Fenway against the O's tonight.
Posted by The Omnipotent Q at 11:40 AM