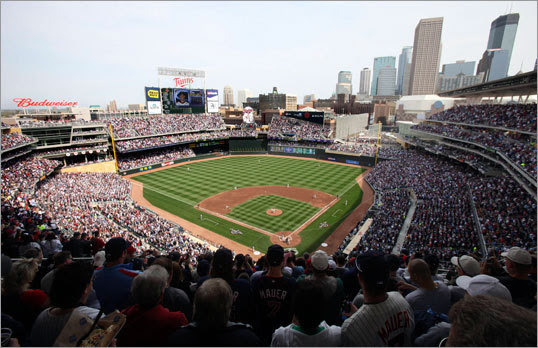 The Minnesota Twins opened their brand new stadium yesterday, Target Field, and it looks like a beauty. (Hey, Minneapolis, can we get the Vikings a new ballpark, too? That's a discussion for another time.) And they celebrated it with a 5-2 win over the Red Sox. (It was also the first time the Red Sox opened any brand new ballpark since 1923, when they opened Toilet Bowl Uno.)

Jon Lester gave another subpar performance, and looked like the young rookie who always seemed to give the Sox a 5 inning, 100-pitch game. And yesterday it was 107 in five innings. He gave up two in the first and left the bases loaded, and gave up four of the five runs. He simply had no command, and seemed to go to three balls on most hitters.

The Red Sox could manage only one run off Carl Pavano in the six innings he pitched. Back-to-back doubles by Kevin Youkilis and David Ortiz in the fourth inning put the Sox on the board. But it was another forgettable day for Papi, as he struck out two more times.

Dustin Pedroia's sacrifice fly in the eighth accounted for the other Red Sox run.

Jacoby Ellsbury sat out with the rib injury. He is questionable for tomorrow's afternoon game, and may even sit out the entire series. Jeremy Hermida played left field yesterday in his place.
Posted by The Omnipotent Q at 11:46 AM