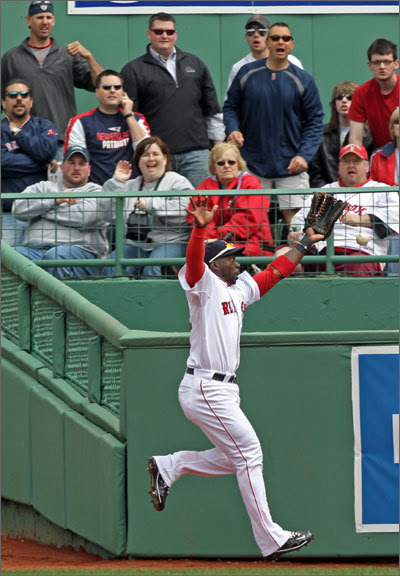 An embarrassing four games against the Tampa Bay Rays concluded with the Red Sox get whacked again, 8-2, before a sellout crowd on Patriot's Day, ending a six-game winning streak they had on this holiday.

Once again, the Sox couldn't get a hit with men in scoring position, and John Lackey got raked over the coals, as he surrendered all eight runs in 3 1/3 innings.

They are 4-9, and now 6 games back of the Rays in fourth place. They've lost five straight.

How embarrassing was this weekend? The Red Sox never had a lead in the series, and after blowing that bases loaded opportunity in the first game on Saturday night, I had a feeling this would be a weekend to forget. (The last time the Red Sox led in any game was the win in Minnesota last Wednesday.) The last three games were blowouts. (Despite the 6-5 score in Game 2, Tampa Bay was comfortably ahead most of the way.)

The Red Sox are now an absymal 0-for-their-last-32 with runners in scoring position.

One thing is for certain: the Sox won't win with Bill Hall playing center field. (Pictured, as B.J. Upton hits a three run home run in the third.) He finally got his first hit of the year, and now he needs just one more to match his error total for 2010.

In the words of Dustin Pedroia (from Amalie Benjamin) after the sweep:
When you don't show up to play, you're going to get beat. Doesn't matter if you play the Rays or [bleepin'] Brookline High School.

So, is this an aberration, or a portend of things to come?

Your guess is as good as mine.
Posted by The Omnipotent Q at 2:42 PM