Welch, A Rocket Misfire and The Hated Indians 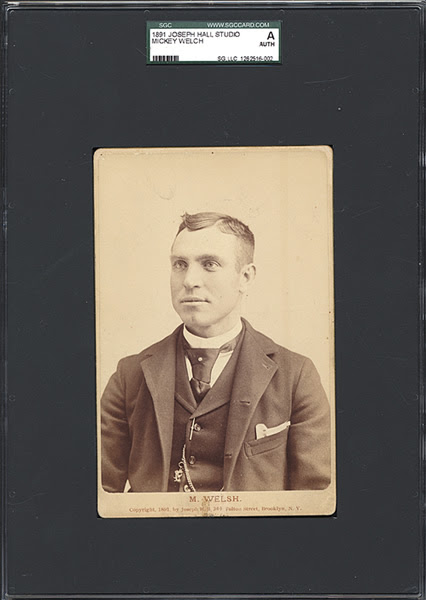 Here's an interesting article from the new Hauls Of Shame web site about a rare baseball card that was apparently stolen from the Baseball Hall of Fame.

It was of Hall of Fame pitcher Mickey Welch, who won 315 games in the 19th century, and was one of the best right handed pitchers of his era. His card is considered to be more valuable than the famous Honus Wagner card.

The Welch card was supposed to auctioned off on May 1st, but Robert Edwards Auctions pulled the sale down.

Elsewhere, anything that embarrasses Roger Clemens is always fine by me. (Thanks to my pal Jere for the link.)

The Indians are more despised than the Yankees or Red Sox, and are the most disliked baseball team? The Reds and Astros are more hated than the Yankees? You've got to be kidding me. (I would bet that has something to do with their nickname.) No one, and I mean NO ONE, is more hated than the MFY, no matter what some half-assed study finds. (With thanks to Allan at Joy of Sox for the link.)
Posted by The Omnipotent Q at 11:55 AM