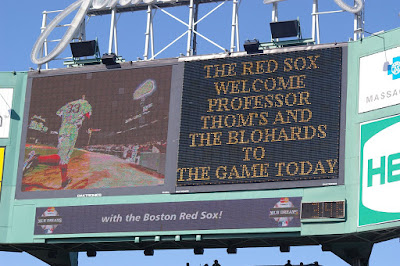 First off, a very Happy Easter to all of you out there. Hope all of you enjoy the day.

I will be spending my very first Easter Sunday in Fenway Park, as the Red Sox open up the 2010 season and play the very first game of the '10s against Those Guys Just to the South of New England. (Or is it "teens?" We have to make a decision about this.)

I've been to two Yankee Stadium openers in my life, in 1992, with New York against the Red Sox and 2003 against the Twins. The Red Sox lost (and finished last that season, and God-willing, for the last time) and New York won in 2003. I remember that day well not for Hideki Matsui's grand slam in his first MLB game, but for how bloody cold it was that day. It never got above 39 degrees, and it's the only baseball game I have ever worn a parka to.

Thankfully, it will be in the 70s in Boston in Sunday.

I will be going up to Boston with the BLOHARDS, the group of loyal New York-based Red Sox fans, of which I am proud to call myself one. I'll be going up on their famous Opening Day bus trip. I was supposed to go up last year, but the rainout on Opening Day canceled it for me, and I had to my Trivia Night the next day. I'm glad I'm getting the opportunity this year.

I'll have a full report on the game on Monday. I won't be home until after 5 AM, as thanks to MLB and their ever-increasing need for greed, ESPN is showing the opener at 8 PM on Sunday.

A blessed Easter to all of you.
Posted by The Omnipotent Q at 12:01 AM

Happy Easter - Enjoy the trip - bring a home a win. Will be thinking of you at Thoms and will probably see you there for the rest of the Yankees series. Glad the season is here :)

Have a Happy Easter too, Rick. I'll be thinking of you and the entire Thom's crew at the Fens tonight. See you on Tuesday!

I cannot WAIT to get a recap!! Hope you have a blast!

I hope, like mine, your section was strewn with entitled-feeling Yankee fans who, at 5-1, were more certain than anything in the world that their team had already won the game, and that you got to watch as they all were forced to shut their damn mouths and slink outta there.

Absolutely right, Jere. There was one moron who carried a sign that said "The Champs Are Here" while New York was leading. He and many of the other interlopers were surprisingly missing by the ninth inning.